If ever a cult rarity deserved a cutting-edge remastered Blu-ray release, Brian De Palma’s Phantom of the Paradise deserved it, and now it’s got one. Glory be to Arrow Video! As we hear in the accompanying interviews, De Palma got the idea for this story when he heard a muzak version of a Beatles song in an elevator. What, he wondered, underlied the process of turning this beautiful and unique work into such an ugly and emasculated echo of itself? Two years later, he had finished his original variation on the Phantom of the Opera story, updated and changed to reflect how big business preys on talent and destroys the human beings behind the creative vision.

The story follows composer Winslow Leach (William Finley), who has written a huge Faust opus. The wealthy musical/theatre/television producer guru known as Swan (Paul Williams) steals the music and throws Leach in jail on trumped-up drug charges. But Leach escapes and tries to sabotage the record factory, but gets his head caught in the presses, which ruins both his face and his voice. He then becomes the haunting phantom of Swan’s theatre, the Paradise. A talented songstress that Leach likes, Phoenix (lovely Jessica Harper), ends up making him cut a deal with Swan, agreeing to compose even more material for him, and Swan essentially chains him to a recording console, and intends to literally wall him up inside the tiny room as he finishes his composition. Unsurprisingly at this point, ineffable contracts signed in blood are involved. 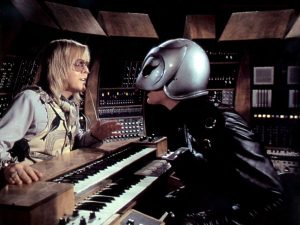 Phantom of the Paradise is scathingly expressive in its unrelenting social criticism, pouring on the anger and frustration of being caught in a deeply corrupt corporate entertainment system which sleazily and dishonestly exploits the artists, dissuaging, alienating and crippling their artistic impulses and reducing them to enslaved and drug-addicted objects.

This movie must be De Palma’s most brilliantly off-beat work, representing as every shot does the epitome of the experimental stylism of the seventies. Paul Williams, who plays Swan, also wrote the music in this musical, and some of it is fairly brimming with rhythm and enthusiasm. Mr. Williams is quite the multi-talent, having contributed musical compositions to dozens of movie soundtracks and kept up a long acting career (with more than a few sci-fi credits to his name, too). One needs must be impressed!

If you have any love at all for weird and wonderful seventies pop and counter-culture, there is only one word that can sum up Phantom of the Paradise, and it is: Wow.

This masterpiece of seventies cinema was released on Blu-ray (incl. a Steelbook edition) in the UK on February 24. And the disc, which has an astonishingly crisp picture, contains a totally mind-blowing smattering of extras (some in standard definition), giving us hours of additional enjoyment. Dig it, baby!