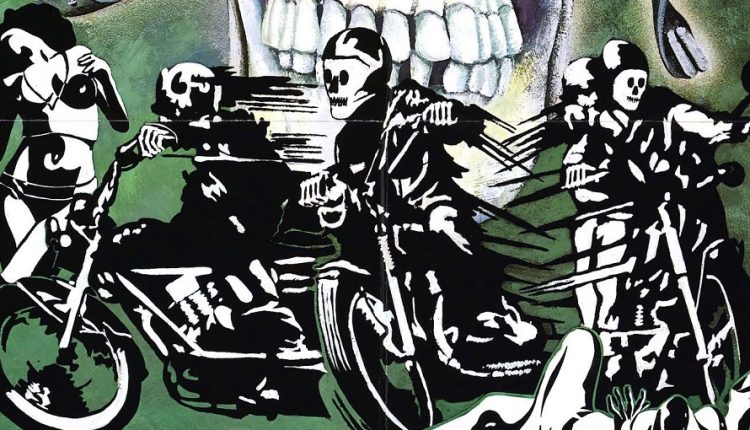 Objectively speaking, Psychomania isn’t exactly what you would call a good film. The acting is varied, the premise is amusing and slightly ridiculous, and it centres on a biker gang who I spent years telling people weren’t even half as tough as those infamous “Hell’s Grannies” featured in a memorable sketch in Monty Python’s Flying Circus. But objectivity be damned, I have always loved this whacky film and I’ll spend as much time as it takes to convince others of its merits.

Let’s get the slight plot out of the way first. A group of bikers, collectively known as “The Living Dead”, find that they can take their misbehaviour to another level when they discover the secret of immortality. It’s all thanks to their leader (Nicky Henson), who shows them that you can come back from the dead as long as you commit suicide with no hesitation or doubt in your mind. Yes, it’s that easy. There’s also some magic involving a toad, and both George Sanders and Beryl Reid (as the older “guardians” who know about the dark arts) grab a decent share of the screentime.

What Psychomania lacks in polish and grit, it more than makes up for in so many other ways. Nicky Henson may not be the best actor around, but he doesn’t have to be. He mainly has to be able to ride a motorbike and act cocky, which he manages to do. Nobody in the gang stands out as being all that memorable, with the exception of the two female members. Ann Michelle is good as the carefree and aggressive Jane while Mary Larkin is a sweet counterpoint to the dark heart of the film. She plays the girlfriend of Henson, and it’s made clear from the beginning that she’s not as eager to try playing games with the grim reaper. Sanders and Reid are both very enjoyable, more than making up for the rest of the rather bland younger cast members, and Robert Hardy is the cop who finds himself with a very strange case.

Writers Arnaud d’Usseau and Julian Zimet don’t really help any of the actors. They’re fine with the central premise, and have some fun with things in the second half of the film, but the dialogue, and moments of clumsy exposition, may prompt some unintented chuckles. Although that doesn’t stop Don Sharp from doing his best in the director’s chair, as he keeps things moving along nicely and even throws in a few very nice cinematic flourishes to alter sets or transition from one scene to the next. He’s helped by a fantastic score from John Cameron, some decent stuntwork, and (nowadays) an undeniable charm that helps the film to become arguably one of the most lighthearted “zombie” movies ever made.

I’m not sure if this review will convince anyone else to give the movie a watch. Anyone who does give it their time, be prepared for a bad movie. But there will be one or two others out there, guaranteed, who end up viewing it as I do. As a great movie, albeit a flawed and dated one.

Released on Bluray this week, Psychomania has been given great treatment by the BFI on a loaded disc I never thought we would see for this cult piece of work. Those who rush out to purchase the disc, as you should, will receive  a remastered version of the film (not exactly a disc to test your home cinema, but most probably the best the film will ever look), a 20+ page little booklet, numerous featurettes, ranging in duration from 2 minutes to 25 minutes, a church-made amateur film entitled “Roger Wonders Why”, and a trivia track from the Wilson brothers (which is a lot of fun, despite occasional typos and grammatical errors). Basically, this is an essential purchase if you have any interest in the movie whatsoever.