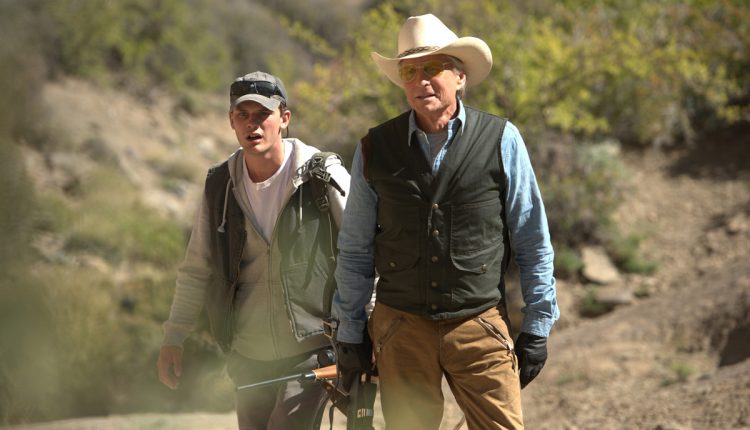 Having fluctuated between the remarkable (Behind the Candelabra) and the rudimentary (Last Vegas) since returning to the acting fold, Michael Douglas effectively revisits the role of Gordon Gekko – the self-righteous star of Oliver Stone’s Wall Street films, who taught a generation that “greed is good” – in this low-rent thriller from director Jean-Baptiste Léonetti.

Here Gekko’s rich and ruthless character is reincarnated into the role of John Madec (Douglas), a high-rolling corporate shark and avid game hunter with an unfortunate eye for sickly yellow Aviator sunglasses, who’s about to sign a deal with the Chinese that’ll make him so much money it would make Jordan Belfort blush. Accompanied by a young but experienced local tracker named Ben (Jeremy Irvine), Madec heads out into the Mojave Desert, determined to add another trophy to his collection. But when a tragedy strikes that has the power to overshadow Madec’s impending deal if discovered, Ben finds himself the target of the merciless businessman’s fiendish mind.

Somewhere within Stephen Susco’s script, which has been adapted from Robb White’s 70s pulp thriller ‘Deathwatch’, is a strong sociopolitical statement to be made about money, power, and the lack of virtue that comes from having both – Léonetti going great lengths in the opening act to establish Irvine’s character as the impoverished good guy. But sadly, before we’ve even managed to make it to the numbingly nonsensical coda, such complexity is cast aside to wander desert alone forevermore.

Instead what we get is a by-the-book survival story that comes off as a cross between a Wile E. Coyote cartoon and Wolf Creek. Despite the best efforts of Dickon Hinchliffe’s spiky score, there’s a discernable lack of tension from the start. Susco’s dialogue clumsily stumbles over stock phrases – “I KILL YOU” screams Madec at intermittent intervals – while Douglas and Irvine attempt to make something out of their mind-bogglingly basic character arcs.

Even at a brisk 90 minutes the film feels too long, the absence of any jeopardy causing Léonetti to wearily stagger from one set piece to the next; all of which push the levels of credibility to varying degrees of absurdity. The repetitive use of lens-flare shots up to the forbidding desert sky attempts to instill some semblance of peril, but it’s equally as ineffective. Indeed, the only people for whom the blazing sun seems to be a real problem is the poor souls stuck in Jeremy Irvine’s make-up department.