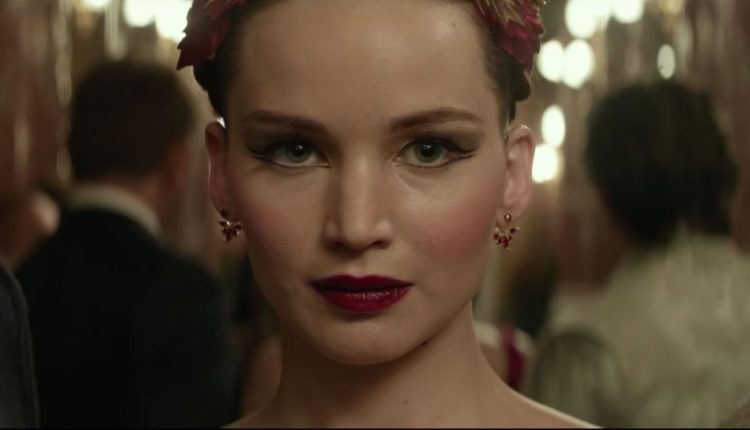 Every action film must, at some point in its development, decide how much regard it has for realism. On one end of the spectrum sit biopics and historical movies, bound by their nature to obey the confines of plausibility (for the most part, at least). On the other, we have the likes of the Die Hard and Mission: Impossible franchises, who think nothing whatsoever of ignoring the dictates of common sense (or the laws of physics) in the name of a good set piece. Part of Red Sparrow‘s problem is that it never quite decides which of these it wishes to emulate.

The concept of the Sparrows – attractive female spies trained to use their sexuality to compromise male targets – sounds like something that would be right at home in farcical espionage literature. Remember Xenia Onatopp from GoldenEye?

Unfortunately, however, there are no inter-coital suffocations here. Nor does anyone burst through any fifth-storey windows or jump from any flaming helicopters.

Dominika (Jennifer Lawrence) is a renowned prima ballerina until an onstage incident leaves her with the sort of gruesome leg break you might occasionally see on Match of the Day. Unable to dance to pay for her sick mother’s care, she agrees to do a job for her uncle Ivan (Matthias Schoenaerts), a senior operative in Russia’s intelligence agency. After a botched mission and some blackmail, Dominika finds herself in a training camp for spies, where she proves to have a knack for the grimier aspects of undercover work. She is assigned to use her newly honed talents on a CIA operative (Joel Edgerton) who is the point of contact for a Russian mole giving information to the American government.

Jennifer Lawrence tries to bring her considerable talent to bear on proceedings, but Dominika is too muddled to make a decent protagonist.

It has the makings of reasonable fare, and the opening half an hour sets up what could have been a much better film. Unfortunately, by the time the last act rolls around it becomes quite difficult to follow what’s going on, and even more difficult to care. The storyline relies heavily on double-crosses to cultivate suspense, but these are poorly outlined and become decidedly tiresome by the end.

Jennifer Lawrence tries to bring her considerable talent to bear on proceedings, but Dominika is too muddled to make a decent protagonist. Her interactions with Edgerton’s frustratingly bland secret agent are not as ambiguously motivated as the film would like us to believe, and neither of the two are dealt with in sufficiently believable terms to qualify as engaging characters.

Francis Lawrence could have spruced things up with some directorial style, but his approach is heavy-handed and uninspiring. Graphic violence, most of it sexual, is used almost ceaselessly in the first act, to the point that it almost becomes boring. As well as this, there is almost no effort to portray Russian characters with any degree of nuance; all are emotionless servants to the national cause, and the men invariably seem to be sexual deviants.

It isn’t all bad. Charlotte Rampling is delightfully icy as Dominika’s mentor, and J-Law really does try her best to make her mark. If it’s a snappy action thriller you’re looking for, however, there are definitely better options than Red Sparrow.