Everyone remembers Snakes on a Plane. Samuel L Jackson personally cites how much he loved the piece and will back it until the end of his days. But what people who watched the 2006 film also remember is how bad it really was – the film was marketed as such. Sharknado feels cast from a similar mould. It’s one of those films that relies on word of mouth, a blanket advertising campaign, and being so damn poor that people have to see just how bad it is. Good news for both directors: it worked! Sharnado’s narrative, or what little narrative there is, is centred on the hilariously and ironically named Fin (Ian Zeiring) who owns a beach front bar also hilariously and ironically named Fin’s. When the crap hits the Fin (too easy) and Sharks literally fly through his bar’s windows, there is only one thing on his mind: to protect his family. He immediately drives, with fellow bar worker Nova (Cassie Scerbo) and surf buddy (Jason Simmons), to his ex-wife April’s (Tara Reid) house and collects her and his daughter Claudia (Aubrey Peoples). Their task is made more difficult, however, when Fin is informed his son is currently off at flight school, a good 15 minutes drive through ravaging shark infested tornados, shark infested sewers and shark infested rivers. Darned. 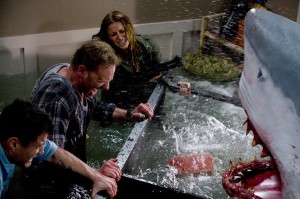 This film must set some sort of Guinness World Record on continuity errors and general production mistakes. Some of them are so simple that you would be forgiven for thinking the editor was drinking on the job. In the opening sequence, for example, there are ominous clouds above the L.A. beachfront as the storm – and pathetic (and it really is pathetic) fallacy – impends its doom on beach goers, match cut to a surfer in the water and there’s nothing but sunshine and blue skies above. The graphics are awful, the CGI woeful and the overall look of the film bordering on disastrous. 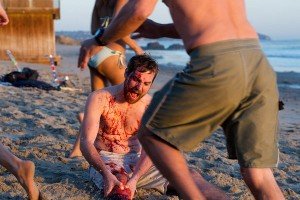 The IQ level for this film has been set low, not least by its lead actress. Tara Reid did herself no favours recently on an American talk show, where she struggled to comprehend how the whale shark came to being. Biology 101 aside, the real mind blowing science moment comes when the group have their moment of clarity to end the horrid ordeal: they plan to blow up the tornados with homemade bombs. Get the mythbusters team on this ASAP. 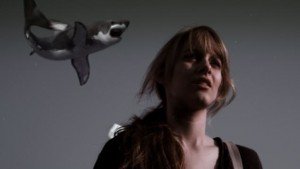 But perhaps the most amazing thing of is that eventually all Sharknado’s negatives and obvious defects mount so high that as a viewer you can’t help but laugh. I found myself smiling throughout the entire film at the sheer ridiculousness of the viewing. Some of the shark kills are phenomenal, especially the final one, and at a meagre 90 minutes, there are certainly worse ways to spend your time. 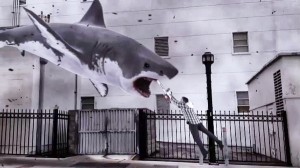 I’m not sure how serious the writer/director/entire film crew were when they signed on for this project. Clearly serious enough for a sequel – Sharknado II: The Second One, again appealing to their target audience with a cunning title explaining just how sequels work. Genius.