by Tue Sorensen
in HE Reviews

Siberian Education is an Italian-produced movie based on an auto-biographical novel by Nicolai Lilin. It is about several different ethnic groups of Russian criminals who during the Soviet era were relocated to Transnistria, an area on the Moldovan/Ukrainian border, and left there to rot. Many of the key actors are drawn from the Lithuanian film industry. Oh, and the movie is in English (with strong Russian accents). So, quite an international assemblage.

The story starts in 1988 in a small town called River Banks where several mafia communities compete for power and control. The main character is Kolyma, who grows up under the auspices of his hardboiled grandfather (John Malkovich), leader of the Siberian mafia community. The Siberians have a strong code of honour, based in part on strong religious feelings, and for instance they consider themselves above undignified crimes like drug-running and prostitution. 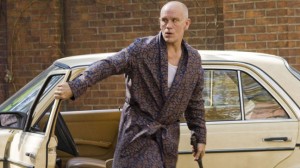 Kolyma has a friend, Gagarin, who during one of their petty heists saves Kolyma from the police but is caught himself. As he stabbed a police officer in the leg, Gargarin, despite being only 12, is sentenced to seven years in prison. The narrative of the movie jumps back and forth between 1988 and 1995, gradually unfolding the tale of what happened when Gargarin came back. Gargarin was always a violent kid, and in prison he fell in with a group called the Black Seeds, understandably despised and considered the lowest of the low by all other crime groups because they have a deal with the police to snitch on everybody else in return for being left (to their drug-running and prostitution) in peace. Kolyma and Gargarin were best friends as kids, and resume their friendship as Gargarin is released from prison. But of course things spiral out of control.

The town’s new doctor brings with him a daughter, Xenya (Eleanor Tomlinson), who is not “quite right in the head”. Being about 19, like Kolyma and Gargarin, Xenya is beginning to understand just how different she is, and how she can never lead a normal life became of her mental handicap. As she says, “Xenya does not read. Poor Xenya!” She alternates between delirious elation and frustrated despair, growing suicidal. Before it comes to this, however, she grows close to Kolyma, and when Kolyma has to choose his first tattoo, he opts for a symbol of “impossible love”; a burning tulip. 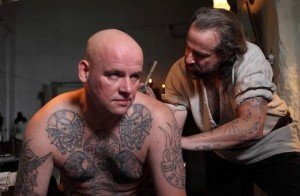 Disclosing further details of the story would be spoiling, but rest assured that it is emotionally hard-hitting. John Malkovich is great as the ruthless yet philosophical grandfather, but the stand-out performance is clearly Eleanor Tomlinson’s utterly convincing performance in the challenging role of the sadly retarded Xenya. I first took note of the excellent Tomlinson in Bryan Singer’s underrated Jack the Giant Slayer earlier this year, but on checking her filmography it turns out she’s been in several other things I’ve seen, such as The Illusionist (2006), Einstein and Eddington (TV, 2008), Alice in Wonderland (Burton, 2010) and The Lost Future (also 2010), and also currently having a part in the TV series The White Queen (which I will rush to watch). Born in 1992, she is undoubtedly a big name to be reckoned with from the latest British crop of great actors.

This is another movie that reminds me a lot of Eastern Promises (2007). Instead of expatriate Russian gangsters, however, Siberian Education gives us something much closer to the real thing, set in an authentic environment and providing a thorough, almost documentary-like description of the cultural background that these people’s thoughts and actions are coming from. Doubtless, some of what is shown here is fictional, but it has that quality of realism where you know that it might as well be entirely true. 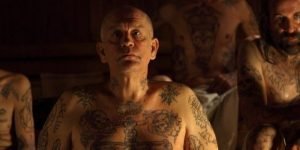 Siberian Education was released on DVD in the UK on October 7.