Two things in particular in this world are beyond my capacity to explain. One is the chaos and unpredictability of the global weather system. The other is how the hell it is possible to make SO many movies that are SO bad. It just boggles the mind. The writer/director here is Jason Trost, who – amazingly – has actually directed something before, but whose other “work” in the movie business is limited to being an extra in a number of movies, often uncredited. He explains in the intro to All Superheroes Must Die (also known as Vs.) that one day he got a call telling him that he had two weeks and $20,000 to make a movie for. Script it, shoot it, wrap it, all in 15 days. Who are the mysterious people who make such heinous calls (Trost doesn’t say)? Production companies? Distributors? Yes, probably. People who know that there are money to be made on straight-to-DVD movies, no matter how bloody awful the movies are. They will be released around the world and rake in a bunch of cash.

On the one hand it is rampant exploitation of the worst kind. On the other hand, though, it is giving young film-makers a chance to show what they can do. Not with proper resources or pay, mind you, but with a shoe-string budget and the (presumably mostly unpaid) help of their friends. So, even if these young film-makers have talent, they aren’t allowed the opportunity to show it, because the production company demands a movie in two weeks! And they probably also demand most of the distribution rights so that the director and other people involved with the actual product probably never see a penny of the profits. It is insane. It is pure exploitation and there oughtta be a law against it. Or, of course, maybe I’m totally wrong and it’s totally different. Who knows. 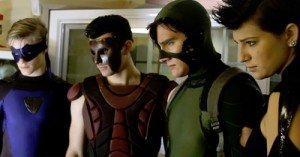 Anyway, since I am forced to, let me look at this movie. Fortunately, I am a fan of superheroes. Unfortunately, this is not a good superhero movie. We have a team of four heroes: Charge, Cutthroat, Shadow and The Wall. Charge is really strong (or at least pretends to be), Cutthroat is really fast, Shadow can become invisible, and The Wall – well, we never find out what he can do. Not having the budget for any kind of special effects not made up of the smoke of dry ice, the movie admirably opts to turn this weakness into a strength by letting the whole premise for the story call for the elimination of the heroes’ powers. The movie starts as they wake up in an unknown small town which has been taken over by the villain Rickshaw (James Remar). They have all been given injections that negate their powers. Except, Charge is still strong (which is sort of explained later). Rickshaw has basically captured the entire population of the small town and tied them to bombs, so he can force the four heroes to go through a series of gruelling rounds where they have to kill each other or sacrifice themselves in order to save the innocent civilians.

The heroes spend a good deal of time walking around and chatting (also when they really, really don’t have the time) and not behaving very heroically at all, both between and during the rounds. The hard choices are sometime made and sometimes circumvented, but the details of the story are so vague and inconsistent that none of what goes on is very convincing. It’s not that the acting is all that terrible. James Remar is clearly the “real actor” of this lot, with Lucas Till and Sophie Merkley also acquitting themselves well. The story is trying to marry horror to superheroes, and while you might call it a different or hybridized take on the genre, it has few semblances to what I would call proper superhero stories. First, these heroes are the modern type who are not particularly heroic; who use profanity and have bad attitudes and frequently hate each other’s guts. This creates artificial conflict and asinine excuses for intensity which large parts of the story is then wasted on. Second, they just kill people right and left, including innocents. In classic superhero comics, which are aimed at an all-ages audience, superheroes are never put into the kind of situation where they are forced to kill people. This movie mixes inconsistent elements of the classic style with the cynical modern style, in that Rickshaw has rigged the game according to his conventional belief of what superheroes conventionally do, but this is not what these characters actually do. And despite their unconventional actions, they still manage to get several of their own number (as well as lots of innocent civilians – nearly all of them, I think) killed.

So what we have here is a profoundly unsuccessful story, both in its own setting (they manage to save maybe two out of all the innocent victims) and in terms of basic storytelling craft, in that this dark and macabre tale has very little indeed to do with heroism or the conventions of the superhero genre. Maybe the director wanted to take superheroes in a different direction; well, sure, but this is not really what superheroes are suitable for. In general, I have to say I detest almost all forms of “dark superhero” tales; in my view, heroes should be bright and cheerful and optimistic; otherwise the essential symbolism simply does not work. Which, incidentally, is also why Zack Snyder’s recent Man of Steel was a disappointment. 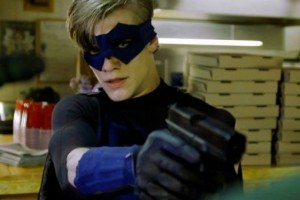 All Superheroes Must Die is mercifully short; only 75 min., which is a relief.

Good news on one other front, too: the DVD, which is out in the UK on October 14, has loads of extras. It includes some no-budget serial show called Blood Beasts (4 episodes, only a few minutes each), and has excerpts from early showings at two different venues, incl. a Q&A with the director – did he cast himself to save money? Absolutely! – where we also learn that there is a sequel coming. Honestly? I’ll probably pass.