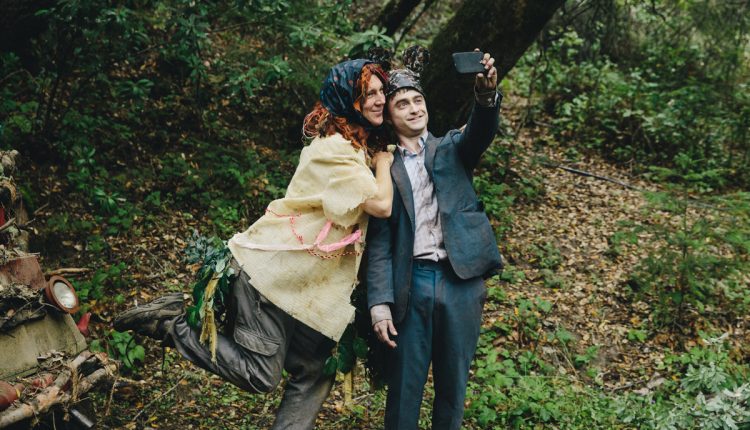 When this premiered during last year’s Sundance Film Festival, it quickly become known as the film with Daniel Radcliffe as a farting corpse. However, this offbeat comedy-drama by a pair of music video directors known as the Daniels (Daniel Scheinert and Daniel Kwan) has so much more than the bodily functions of Radcliffe’s immobile character.

Swiss Army Man opens with Hank (Paul Dano), who is marooned on an island and contemplating suicide when he discovers a corpse washed up on the beach (Radcliffe). Finding that he can manipulate it like a Swiss army knife, Hank calls him Manny and uses it to find his way home. Along the way, he develops a close friendship with the corpse, while slowly bringing him back to life.

On the face of it, the film is a quirky adventure about two loners who learn to survive from each other; Hank learns how to survive in the wild, while Manny ironically learns how to live. As the film progresses, the theme of co-dependency evolves into a deeper connection that stems further than friendship – Hank finds himself questioning his life through Manny’s naivety and occasional philosophical conversations, offering a different, untainted perspective on existence.

With a number of indie hits under his belt since Harry Potter, Radcliffe showcases his comedic abilities and manages to be incredibly expressive and entertaining as a smart-mouth corpse, while Dano’s Hank holds the film together as the oddly endearing hero with a slightly sinister side.

With their feature film debut, the Daniels weave a simple premise with awkwardly humourous snippets that range from the boundaries of common decency to tender bromance moments. Combined with their daring vision of resurrection, a dreamy soundtrack and Larkin Sieple’s imaginative cinematography, the film challenges viewers to see past the dead body and embrace the concept of connection. Whether it is about a crush or an estranged family relative, Swiss Army Man shows that how a connection can affect someone, regardless of whether they are dead or not.

Overall, Swiss Army Man is different in the best way – great performances, beautifully shot and is unlike anything that has come before.

Swiss Army Man is available on DVD and Blu-Ray from 10th April.

Remembering Bette Davis – the one and only …….