When trying to describe Thanatomorphose to other people I said: “remember the leg shaving scene from Cabin Fever? Imagine that spread throughout an entire movie” but I could have just as easily mentioned films such as Nekromantik and The Fly (the Cronenberg remake). Thanatomorphose takes a cue from all of these movies and does more than enough to sit alongside them. 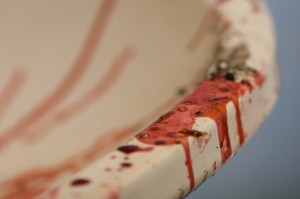 Kayden Rose gives a fantastic, fearless performance in the central role. She plays a young woman who starts to rot, slowly but surely. The first signs appear when bruises on her body, delivered during a night of sex with a rough lover. From then on, the lead character starts to get worse and worse. Yet despite, or maybe because of, the rotting process she still wants to have sex and feel any sensation that she can. 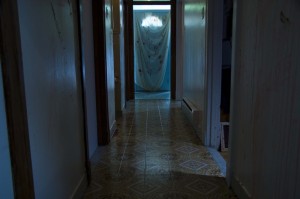 Working as both an explicit body horror movie and also an unsubtle look at how someone can destroy themselves with a dangerously low sense of self-worth, Thanatomorphose is, quite frankly, one of the most impressive and original horror movies that I’ve seen in some time. While it’s definitely not for the squeamish, it’s also not JUST about the grue on display. At least, that’s what I took from it by the time the end credits rolled. 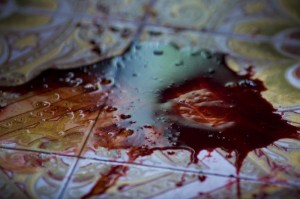 Writer-director Eric Falardeau really impresses with his feature debut (having already given viewers a taste if his unique vision with Crepuscule, a 20 minute short) although he does make a few mis-steps along the way, including one or two sequences that focus on some hallucinatory visuals that feel clumsily inserted just to pad out the runtime. I’m not saying that’s the case, it just feels like that while watching those scenes. 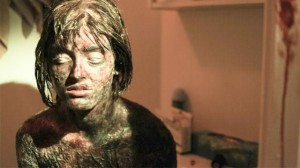 There are other people onscreen, including Roch-Denis Gagnon and Emile Beaudry, but this film belongs to Kayden Rose, even as her form becomes harder to look at while the rot sets in and keeps working away at her. She gives a fantastic performance, and a very carefree one from start to finish. Playing a character who isn’t really alarmed by such a sudden turn of events isn’t necessarily an easy role to play, but Rose really manages to say a lot with the physical side of her performance (the script isn’t overloaded with dialogue, although it has just enough to stop it from feeling too minimalistic).

The movie may lack a certain emotional resonance, leaving the ending as something that’s just . . . . . . . . . . . . . there, but it gets so many other things right that I have no problem in recommending this to people looking for some unique genre fare. Just don’t watch it while eating. 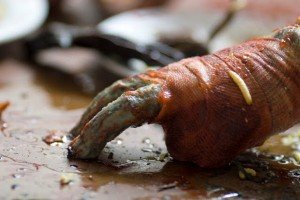 Thanatomorphose oozes onto DVD and other home media here in the UK on 25th November 2013. Extras include 2 short films, a behind the scenes featurette (running at about 23 minutes), trailer and some trailers for other movies released here by Monster Pictures.

Scene Stealer: A Moment of Relief in Jaws