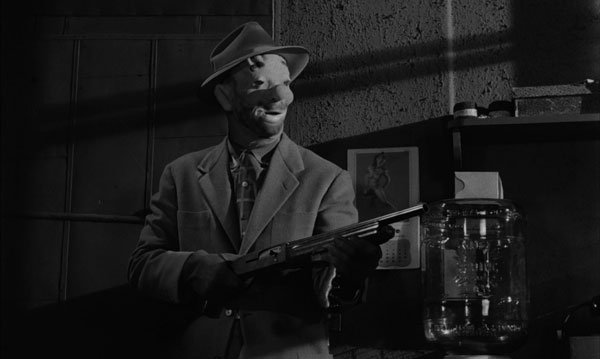 Stanley Kubrick’s full length professional debut opens at a racecourse. With a series of short, sharp images, he shows straining horses and huddled crowds in smartly lit black and white. The light plays cleanly off the setting of the centrepiece crime in The Killing. When location is established, the narrator steps in with a cool, collected voice. He rattles through brisk descriptions, stepping in semi-regularly throughout the 83 minute running time to shepherd the plot to its failed conclusion.

This is Kubrick stripped to the core: Kubrick demonstrating that the man who knew no visual or narrative bounds was built on top of a skilled craftsman. The Killing operates in a bare bones film noir atmosphere with the minimum of character needed to propel celluloid forward. The big score, a daring heist on the vast reserves of cash swilling around on race day is the heart of the film.

The ringleader is Johnny Clay, played with studied detachment by Sterling Hayden. He’s a career criminal recently out of prison. A man of honour, he’s respected by a team that includes a crooked cop, a racecourse teller, an unruffled sharpshooter and a wrestling chess player.

He’s the brains behind a robbery planned out in intricate detail. Playing with split perspectives, Kubrick shows the big day repeatedly from the position of several protagonists. It’s the scene in Groundhog Day when Bill Murray turns to crime on repeat. It rounds out the picture nicely, building tension before the floods burst in a classic airport set finale that was always going to go wrong.

The seeds of failure are sown from the start, predictably with the entrance of femme fatale Sherry (Marie Windsor), the adulteress wife of simpering teller George (Elisha Cook Jr.). Despite the fact that they are a gang of thieves, it’s Sherry who’s presented as the real villain. The men have honour and a bond. George has a manipulative and unscrupulous other half who will tear their enterprise down to get at the riches herself. That’s about as far as we go towards building up characters. Emotion is largely irrelevant. It’s all about the thrill.

The narrator epitomises this. When one of the gang dies, he does so without fuss. The voiceover steps in to state briefly the time he died. It might as well have been the shipping news for all the importance given. The task is the real character here, perhaps the only one. Kubrick lavishes care on the heist, eager to show it from every angle. That he finds something fresh each time justifies this. The fluid camera movements which hold screens entranced for three hour running times later in his career are all glimpsed, as is that air of cold detachment some criticise and some love.

Looking too hard for comparisons is a mistake though. This is Kubrick mastering form and showing he can do limited genre pieces as well as anyone. And it’s as that The Killing should be judged. Fast paced yet methodical, full of tricks and blessed with several stand out images, this is film noir as a glorious matter of fact sugar rush.