by Chris Watt
in HE Reviews

Like many films of its type, A Long Way To Nowhere is about brushing against fame.

Portugeuse born punk-rock band The Parkinsons (made up of singer Afonso Pinto, guitarist Victor Silveira and bass player Pedro Chau) began playing the clubs in Camden back in the early noughties, at the fag end of Brit pop, a time when the UK music scene was in a slump. With a sound part Stooges, part Clash, part something totally original, they gained a reputation, almost immediately, as being trouble makers, whose live performances often descended into lunacy, wall climbing, equipment-to-floor interface and nudity.

Caroline Richards is no stranger to the documentary format, or the music scene in general, having worked as an editor on films such as The Ecstasy of Wilko Johnson and Oil City Confidential, honing her skills as a storyteller, adept at crafting order from chaos.

A Long Way To Nowhere is many things, but its editing is superlative, scaling down 100’s of hours of footage of the band at gigs, backstage, on the road and generally pissing about.

The interviews are all open, honest and at times remarkably poigniant. A tour of Japan falls victim to absent drummers, fatigue and a punishing schedule that saw them do 22 gigs in 30 days.

And yet, there is surprisingly little animosity from any of the band members, aimed at each other. Unlike the usual clichés of sex, drugs and rock and roll, partners are conspicuously absent from their lives and they don’t touch drugs(other than alcohol). Indeed, the only sexuality on display is their own willingness to expose themselves onstage. Hilariously, they even had a groupie who staggered around the dancefloors in his birthday suit, until he knocked himself out against an amp.

You don’t get that kind of behaviour at a James Blunt concert.

What strikes you most about the subjects, is how smart and deceptively sweet natured they are. On stage, they writhe, sweat pouring from their souls, defiant of authority (particularly gig security, with whom they have many a violent run in) yet off stage, they are thoughtful, kind and very protective of each other. There is a distinct air of family to the group.

Having said that, they go through drummers quicker than Spinal Tap and in the end, their raw power live is what wrecked their potential as studio performers. Reluctant to sign any record deals, they were, in many respects, too good for a conventional studio album. After all, no recording could quite capture the energy that each of the band members gave to their audience each night. The catch 22 of such business, was that they made little to no money for all the work they put in. In one particularly telling moment, ex-drummer Chris Low states that once he quit the band he started working in a clothes shop, and made more money in his first month than he ever did with them.

The juxtaposition of life in London and life back home in the beautiful, quiet Coimbra, is almost too perfect a metaphor. Beautifully shot, this idyllic location seems such an unsuspecting motherland to these outrageous performers. And yet, there they were, origins be damned. For these guys, it was all about the music.

There is such a momentum to this film that you could happily sit for three hours in the company of this immensely likable bunch of misfits. Richards keeps it lean at 98 minutes, which feels very punk. It’s a tactic that works, leaving you wanting more.

Richards’ film is a portrait of a time when music needed a good kick in the ass. 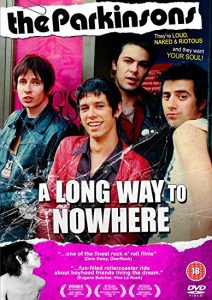 The Parkinsons: A Long Road To Nowhere is now available on DVD, cert. 18.