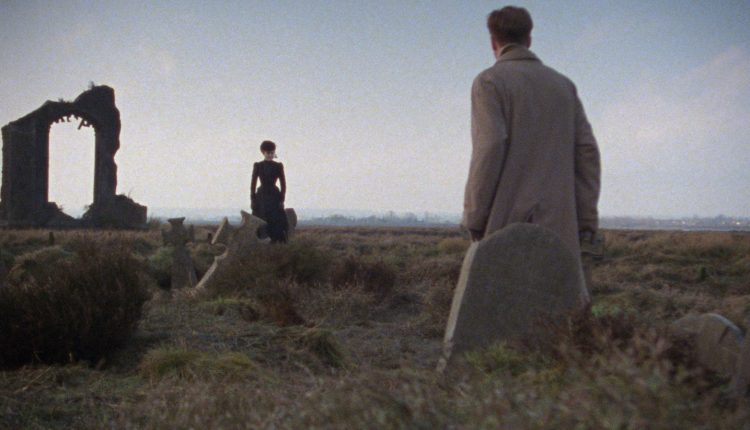 The infamous 1989 TV movie version of The Woman In Black returns to terrify more unsuspecting victims. This time via a digitally remastered Blu Ray packed full of special features.

Susan Hill’s classic ghost story has been scaring the pants off audiences for decades. Across every conceivable medium whether that be the novel, stage play or 2012 movie adaptation starring Daniel Radcliffe.

In an interesting twist of fate, in 1989 it was Harry Potter’s dad Adrian Rawlins who made the fateful trip to Eel Marsh House. Rawlins played Bill Potter in the film series.

When a friendless widow dies in the town of Crythin Gifford, a young solicitor is sent to settle her estate. Following cryptic warnings from the locals regarding the terrifying history of the old woman’s house, he soon begins to see visions of a menacing woman in black…

It is crazy to think that this feature length chiller was ITV’s flagship programme for Christmas Eve in 1989. A far more frightening festive story than one featuring Ghosts of Christmas Past!

The quality of the restoration is excellent and it looks brand new. The only thing that is evident of its age is the way that screenwriter Nigel Kneale and director Herbert Wise deliver the horror. Whereas the 2012 Hammer version catered for a younger audience fed on an appetite for jump scares, the TV movie opts for the slow build. Rawlins’s moving performance as a good man placed in the middle of a horrific scenario, one that everyone is aware of but does nothing to stop, helps endear him to the audience and creates a sense of empathy with him. The tension and dread is slowly ratcheted up, increasing during every visit to the creepy old house out on the marsh. Enhanced by fantastic sound design, in particular bringing the ghostly horse and trap to (after)life.

All of this ultimately leads to one of the most blood-curdingly terrifying moments in television history.

The Blu Ray comes with an audio commentary from Kim Newman, Mark Gatiss (League Of Gentlemen, Sherlock) and star Andy Nyman (Ghost Stories). All of whom are huge horror fans and have produced their own ghost stories. Their commentary is reverential but also full of revealing trivia and analysis and is definitely worth a listen.

The Woman In Black was buried deep in the television vaults for far too long. It is fantastic to see she has awoken, back in Black, to haunt a brand new generation.

The worldwide Blu-ray debut of The Woman in Black is available exclusively from the Network website on 10 August.