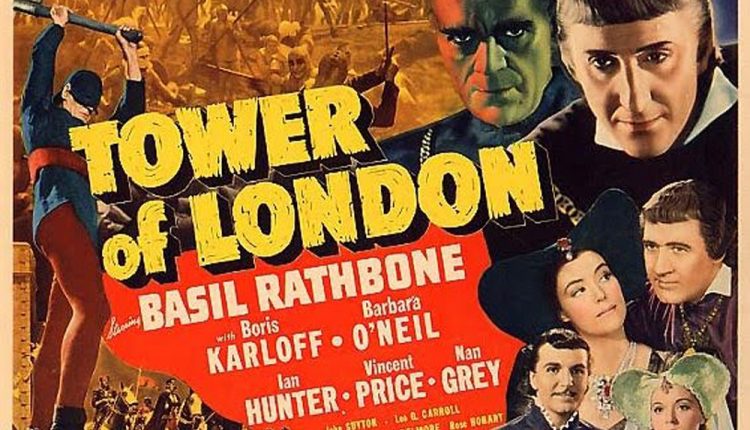 Loosely based on the life of Richard III (played by Basil Rathbone), Tower of London follows the story of one of the most notorious monarchs in British history who, with the help of his bloodthirsty henchman Mord (Boris Karloff), systematically despatches anyone who stands between him and the throne of England.

Looking at it now the historical accuracy of this 1939 Universal horror is doubtless open to debate. The story was written for the screen by Robert N. Lee (the bother of the film’s director Rowland V. Lee), who had apparently spent considerable time researching British history. However, though the basis for the piece is founded on fact, much of what goes on was clearly reimagined with horror film audiences in mind.

For it’s as a horror tale that this film was obviously intended: though, even by the standards of the period, there is little here to scare. The mere presence of two of the genre’s greatest practitioners – Rathbone (as the evil hunchback Richard, Duke of Gloucester) and Karloff (as his clubfooted executioner sidekick, Mord) however, is enough to create unease. Their portrayals of these wicked conspirators lifts what would otherwise have been a mere historical melodrama, to the echelons of classic chiller.

Despite having not much more than a walk-on role in the proceedings – as the minor royal, the Duke of Clarence – a young Vincent Price manages to ham it up, stealing every scene he appears in, in what was only his fourth screen outing. Appearing in the 1939 version of Tower of London could be seen as a dry run for the actor, who went on to star in the 1962 remake of the same film, as well as recreating his own death scene from the earlier film in the infamous 1973 Shakespearian horror mash-up Theatre of Blood. The presence of Price, along with that of the young Donnie Dunagan – who, despite only making seven films between 1938 and 1942, notched up such iconic roles as Baron Frankenstein’s son in Son of Frankenstein (1939) and the voice of the young Bambi in the 1942 Disney classic – makes the film worth viewing.

Many other aspects of the film are, if scrutinised, unfortunately well below par. The male costumes, on the whole, look reasonably authentic for the period: but there’s little you can do wrong with a doublet, hose and velvet cape. The women’s attire on-the-other-hand leaves much to be desired. Designer Vera West – who did the ‘gowns’ – and Eugene Joseff – responsible for the elaborate costume jewellery – were clearly told to bring a touch of ‘Hollywood glamour’ to their interpretation of the medieval outfits, with low cut necklines, tightly fitted bodices and mountains of multi-stranded pearl chokers. Various other pieces of regal regalia are also better seen from a distance, as on closer inspection they clearly miss the mark: at one point a cardboard crown, when knocked to the ground from the king’s head, does all but bounce back up again.

But this is nitpicking for, despite its shortcomings, there is no denying that Tower of London is an intriguing piece of celluloid escapism: a prime example from an era of Hollywood filmmaking where everything was approached with such seriousness, that the results – no matter how outlandish – appeared believable. An era which, sadly now, no longer exists. 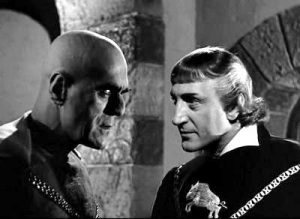 Tower of London (1939) is released on DVD by Fabulous Films Ltd / Fremantle Media Enterprises, on the 21st August, 2017.