AKA A Viking Saga: The Darkest Day.

Imagine a mud-spattered young monk, scowling under a grey sky. Do you see that image in your mind? Hold it there for 90 minutes, with occasional flashes of stabbings and one moment of sodomy. Congratulations, you’ve just simulated the experience of watching Viking: The Darkest Day, a plodding, dull and decidedly . . . . . . . . . . overcast movie, in so many ways. 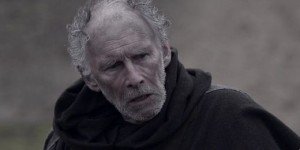 Marc Pickering plays a young man who ends up protecting a holy book, the holy gospel of Lindisfarne, from invading Viking warriors. That’s all there is to it, to be honest. Pickering meets some other people along the way, but his main objective is to protect the book and stay alive while the nasty Vikings stay in hot pursuit.

Director Chris Crow (who also co-wrote the screenplay with Graham Davidson) doesn’t do anything notably bad, but there seems to have been a concerted effort to suck every ounce of entertainment and joy from the final product. I get that the subject matter, and the environment, is supposed to be grim, but this is just unrelenting. And it’s not just grim, it’s also dull. Even fight sequences, of which there aren’t all that many, are a bit tiresome, with some nastiness thrown in there in an obvious attempt to differentiate this from anything you might see on The History Channel. 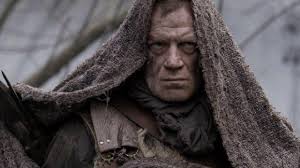 I can’t complain about the acting, as everyone dresses up and puts on their best LARP persona. Pickering is very good in the lead role, all vulnerability and naive optimism mixed with mild terror, Mark Lewis Jones does fine and brothers Paul and Michael Jibson both provide decent support, with the latter having the best moment of the entire movie. Everyone else, although they do decent work, blends together into one big, muddy cast. Some women pop up, with one or two of them being witches (not necessarily bad witches), and other men fight and help to either protect or try to capture the book.

There are many ways in which Viking: The Darkest Day ISN’T bad. It’s technically competent, for example, and should appeal to those who like historical fiction (I guess). It just didn’t work for me, in the slightest. Being boring is, as I have said many times, the worst cinematic sin, and this movie was one of the most boring that I’ve seen in some time.

Viking: The Darkest Day is released on shiny disc form on the 4th November here in the UK. I don’t recommend it.