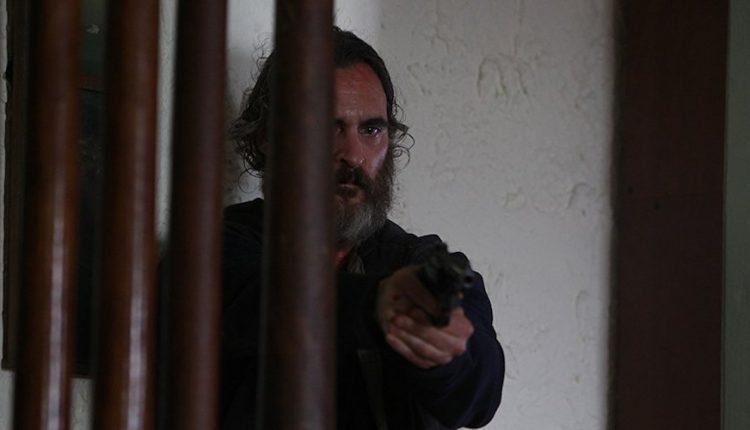 Joe’s job is killing him. I don’t mean like how your crappy office gig makes you feel like a zombie shuffling through a purgatorial existence of Outlook meeting invites and awkward tea break conversations. Joe’s line of work is a little more intense. The protagonist of You Were Never Really Here, played by Joaquin Phoenix, rescues underage girls who have been kidnapped, run away from home, or otherwise trafficked into the sex trade.

This already-miserable business also involves him meting out a significant amount of violence on the men responsible. It’s a line of work which appears to be having a dangerously detrimental effect on his mental health, and that’s before he gets embroiled in a conspiracy involving a senator’s daughter (Ekaterina Samsonov).

That set-up makes You Were Never Really Here sound far more conventional than it actually is; some sort of arthouse Taken. In fact, besides some sterling action sequences, Lynne Ramsay’s fourth film as director tugs on a thematic thread familiar from her previous book adaptations Morvern Callar and We Need To Talk About Kevin: unusual, often self-destructive responses to trauma.

When he isn’t enacting bloody vigilante justice upon Very Bad Men, often wielding some kind of blunt implement but often with his own two fists, Joe appears to live in the dissociated state of the PTSD sufferer. He stands silent and glassy-eyed on subway platforms, apparently unaware of what an intimidating figure he cuts with his hulking physique and untamed facial hair.

Nothing is clear in a story which, much like Ramsay’s previous work, is short on expository dialogue,  strong on symbolic imagery and meaningful silences. When it needs to, though, You Were Never Really Here can raise its voice. Radiohead guitarist Jonny Greenwood’s score — as stylish and volatile as the images it soundtracks, like Johnny Barry collaborating with Tom Waits — is most noticeable during the action sequences, where a detached camera glides ghost-like alongside Joe, with cuts to the eerie quiet of CCTV footage ensuring the violence is always realistically brutal, not neutered and Hollywood-cool.

Ramsay gives us a couple of glimpses into Joe’s previous lives, in a Middle Eastern warzone and then in some form of law enforcement. They are uniformly moments of violence and death. It’s not hard to put two and two together when assessing the modern-day man we meet: the one who pops pain medication like Tic-Tacs, clubs other men to death with claw hammers, and runs himself through a home-made series of endurance tests which double as forms of self-harm (holding his breath with a plastic bag tied around his head, dangling a pen-knife over his face while lying down).

Phoenix’s performance is contained and withdrawn, but it can similarly work in the higher registers without appearing histrionic. Violence has eroded and continues to disintegrate Joe’s psyche. Yet it’s what he’s been trained to do, and so his work involves continued bloodshed. It’s a vicious cycle. Ramsay’s film is intense, and often difficult, but it’s not altogether gloomy. In his downtime between jobs, Joe cares for his elderly mother (Judith Roberts), a relationship which has a warmth and care that appears entirely contra to the action sequences.

As the mostly silent, hulking, scarred and bearded Joe, Phoenix puts in perhaps the best performance of his career outside a Paul Thomas Anderson joint. Comparisons to De Niro and Taxi Driver are warranted, both for the quiet complexity of the acting on show and the film’s (mostly) un-exploitative exploration of how violence and trauma — especially in service to a state military — can destroy people. It’s an intensely sympathetic but also intermittently frightening portrait of a deeply wounded man who, like an injured and cornered animal, could still lash out with great violence at any moment.

There are visual nods to influences such as Straw Dogs and Alan Clarke’s Elephant, but for the most part Ramsay’s style remains entirely her own. Her steadicam often struggles to anticipate what Joe is going to do next, floating ahead of him down a corridor and then having to double back. The aforementioned sequence shown entirely by cutting between surveillance footage is thrilling and disquieting, the images and music playing in the rooms becoming desynchronised and overlapping with each edit.

You Were Never Really Here is a revenge thriller reduced down to its base elements, with a cynical view of the capacity of retributive violence to make the world right, providing no easy answers for its tormented lead.

The Blu-Ray reviewed included the bonus feature “From Book To Screen.”

You Were Never Really Here is out on DVD, Blu-Ray and Digital Download now.