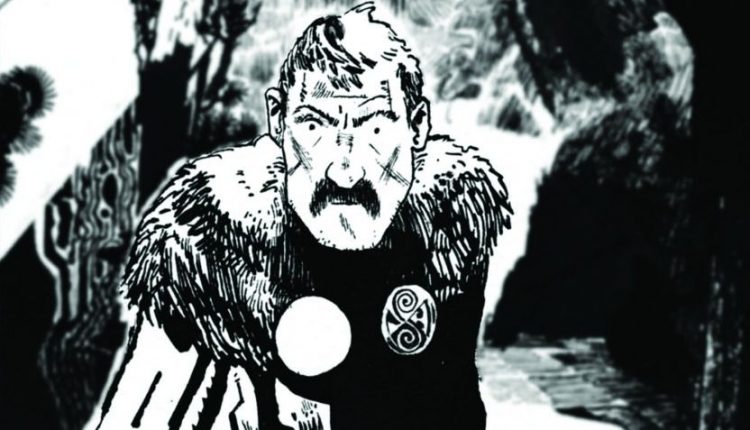 This year’s Flatpack Film Festival has offered an eclectic roster of events big and small, from the historical to the fantastic. The diversity of Flatpack’s programming shouldn’t encourage comparisons, but it’s difficult to deny that The Paper Cinema have created a live cinema event that stakes a firm claim for best of the fest.

This adaptation of Macbeth dispenses with the bard’s prose entirely, instead telling the story with music and wordless projections that blur the line between animation and puppetry. In place of actors, characters are rendered in detailed illustrations that recall grisly 2000AD comics. Three puppeteers imbue them with subtle movement in real time, projected live to the screen via simple digital camcorders.

“…even a tiny crown made of tin foil becomes an immense, looming icon of power and glory.”

This is a brutal, stripped-to-the-bone Macbeth, set in a dark, damp Scotland whose subjects are haggard and ravaged by war. Though a prior familiarity with the plot is helpful, the production does exceptionally well at telling a fluid, well-paced story with sophisticated visual language. Live-action camera movements are seamlessly replicated in miniature, creating moments of striking brilliance. Everything seems to be in constant motion, so that transitions between scenes are generous and inventive, fastidiously resisting the familiar. It never once feels like the simple puppet show it might threaten to be – even a tiny crown made of tin foil becomes an immense, looming icon of power and glory.

In its bold imagery and invention, The Paper Cinema recall the best of silent expressionist cinema – though their evocative soundscape is anything but silent. Two musicians switch deftly through instruments and styles, playing anything from folk jigs to heavy metal. They also create some delightfully haunting foley, which I couldn’t help but look at: the sound effects for one particularly gruesome moment are created with a head of lettuce.

The ultimate pleasure of Macbeth is in seeing the artists at work alongside the film. As projectionists are usually seated behind an audience we tend to forget about them, but here the film is literally created before our very eyes. Rather than distracting, it’s a delight to see the giant images on screen and then to work out how they are achieved by miniature equivalents below.

The production is immensely boosted by this transparency of process, and The Paper Cinema clearly embrace it – the characters are first introduced to us in as drawings in a sketchbook, complete with notes and doodles in the margins. It’s a spirit of generosity that all too rarely enters the cinema screen, as many filmmakers are concerned with disguising their techniques rather than highlighting them. But the pleasure here is marvelling at how a spectacle is created from such lo-fi techniques. For one psychedelic sequence they even point the camera at the screen to record its own projection, creating a glitch effect familiar to anyone who plugged their family’s camcorder into the TV as a child.

In this case at least, peeking behind the magician’s curtain is no barrier to enjoying the show. Drawing on both the language of film and the power of live performance, The Paper Cinema have created something that is more cinematic than just about any Macbeth adaptation I’ve seen on screen before.