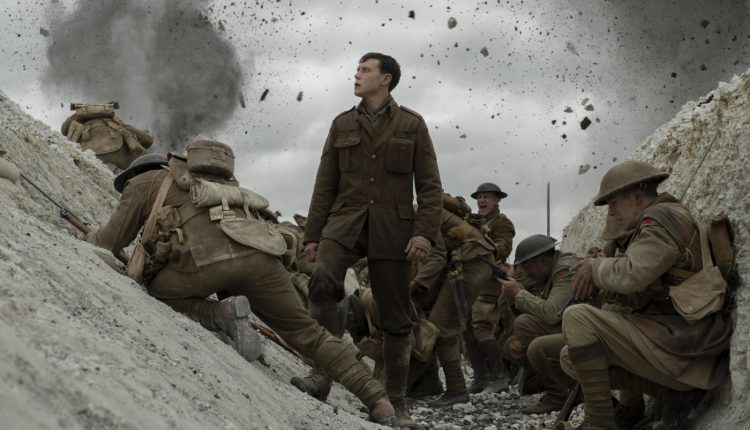 1917 arrives in cinemas this week, fresh from winning Golden Globes for Best Picture and Best Director. Does Sam Mendes’ war epic live up to the hype? And where will it stand when compared to classics such as Saving Private Ryan and Dunkirk?

Played in one continuous shot, 1917 fully immerses you within the brutal reality and haunting fears of trench warfare in the First World War. Two young British soldiers, are sent across abandoned enemy territory to deliver a very important message. If they do not make it, hundreds of soldiers will walk straight into a deadly attack.

Let’s get to the elephant in the room first of all. Much has been made of the film’s USP (unique selling point). That it is filmed to look like it is all one continuous shot. However that is actually not the case. Yes, there are obviously hidden edits throughout to (impressively) create the illusion of a continuous shot. Yet there is a hard cut to black around the halfway point of the story which thus results in two shots rather than one. Nitpicking perhaps but important to note given the Oscar narrative being created behind the film’s visual storytelling.

That is not to say that it is not a stunning film to watch. Roger Deakins‘ cinematography will surely result in his second Academy Award following Blade Runner 2049. No one shoots dawn and dusk better than Deakins and the scene in Ecoust-Saint-Mein is a visual highlight.

The decision to follow the two soldiers puts the audience right into the heart of the action. We feel every shell blast and bullet ricochet as MacKay and Chapman make their way through enemy lines. It also means that there is no way the audience can escape or experience a moment of calm unless the soldiers do. We live and breath every anxious, terrifying moment as if we are the third soldier on the mission.

Yet the film’s greatest strength (the cinematography), is also its undoing. This reviewer found himself following the camera rather than the soldiers, conscious of how it was moving through each scene. Revealing the artifice of the process and denying an emotional connection with the characters. Which is a shame as MacKay in particular delivers a solid performance of a young man haunted and broken by war.

At times, it feels like a first person video game as you complete your mission. Where at the end of every section of the mission you reach a save game point where you are given some exposition from an A-List British thespian such as Colin Firth, Mark Strong, Andrew Scott and Benedict Cumberbatch.

That said, the end spectacle is undeniably thrilling as it reaches a crescendo in the final act with a race against time to deliver the message. Thrillingly directed by Mendes and scored by Thomas Newman (who has taken a note or two from Zimmer’s score for Dunkirk).

1917 is a technical marvel to behold that puts you right in the heart of war but ultimately leaves you emotionally cold to the resultant horror and heroics of the men involved.