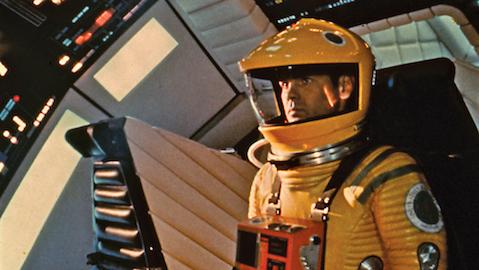 First of all, before I bite the bullet and review a movie that many see as the greatest science fiction film of all time, let me help win over any detractors with a link to this fantastic site. 2001: A Space Odyssey was a movie designed to raise questions, not answer them, but this site certainly provides a fantastic interpretation of the main sequence of events depicted and how they do amount to more than just one visually stunning scene after another.

Now, without further ado, my futile attempt to do justice to a landmark in cinema.

Then we have 2001: A Space Odyssey, a stunning mix of audio and visuals that towers over the sci-fi genre, ironically, like some black monolith waiting for everyone else to catch up. The fact that it still sits at the top of the pile almost 45 years after it was made should tell you all you need to know about what an astonishing masterpiece it is.

This is a film about much more than a simple plotline. It’s a movie about big ideas and the nature of man, exploring both outer space and inner space. Everything is tied together by a large, black monolith – an alien object that tends to trigger strange and disturbing events. From the dawn of man to the pinnacle of the space age, the monolith proves to be quite a catalyst whenever it is encountered.

Even if you haven’t seen this movie, then you probably already know plenty about it. The special effects hold up almost perfectly to this day: the onboard computer (HAL) has been referenced numerous times and is perhaps the most memorable character from the small cast. The piece of music entitled “Thus Spoke Zarathustra” by Richard Strauss is now called “you know, that bit of music from 2001: A Space Odyssey” by casual music fans who don’t know many classical pieces. As for the finale, it really does stand up as “the ultimate trip”:  a fact that was capitalised upon by cinema owners back when the film was first released and saw many customers coming along to experience it under the influence of various substances.

It’s also one of the few (is it the only? please do let me know if there are others) movies to accurately portray the fact that there is no sound in space – all of the scenes showing exterior activity in space are completely silent, with the exception of any musical score.

Keir Dullea will forever be Dave Bowman to sci-fi fans and Douglas Rain will forever be famous for voicing HAL but this movie, even more than his others, belongs through and through to the perfectionist Kubrick. It’s a meticulously designed treat for cinephiles from start to finish and a thought-provoking look at the evolution of man, machine and the relationship between the two.

Ending this review with one seemingly strange caveat, if you’re a movie fan and after a great movie to watch one evening, then don’t necessarily think that you’ll be able to watch this and immediately love it. It’s an experience that demands your patience, your full concentration and your immersion into the very heart of the universe. As ashamed as I am to admit it, the very first time I saw 2001: A Space Odyssey, I was pretty bored and wondered what all of the fuss was about. I was 16 years old and thought I was already a fairly cine-literate, mature viewer.

Thankfully, as the movie reminds us, we evolve.