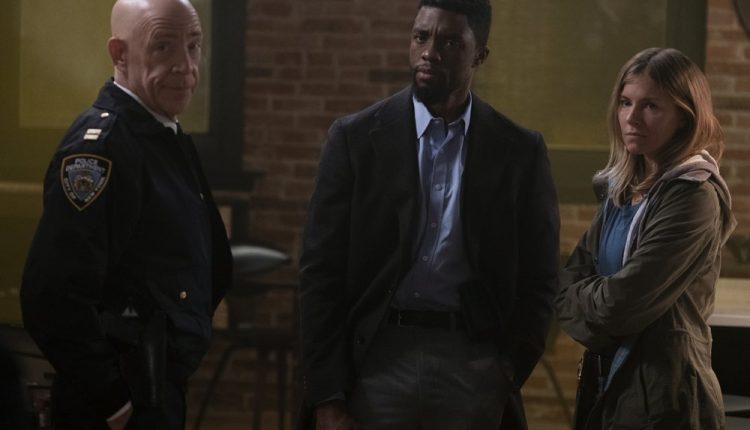 There is no doubt that actor Chadwick Boseman has the magic touch when it comes to chewing up the scenery on the big screen. Whether demonstrating such force in revealing biopics such as 42, Get On Up, and Marshall or appearing in sensational superhero cinema that was the global breakout Black Panther it is interesting to see what Hollywood horizons are in store for the resilient performer. In the toothless cop caper 21 Bridges, the usually charismatic Chadwick dons a tarnished badge in a cliched police procedural handcuffed by its rudimentary rhythms.

Director Brian Kirk (credited with a few TV directorial projects) and screenwriters Matthew Michael Carnahan and Adam Mervis conjured up a murky manhunt police potboiler that strives to be moody and mischievous but is rather conventional in its tension-filled premise. We have essentially seen the blueprint to 21 Bridges before–a reactionary hard-boiled detective hampered by city-wide panic as he hunts down the baddies before they decide to strike against him. Indeed, Boseman deserves better that this alarmist run-of-the-mill yarn that sluggishly pours on the atmospheric suspense.

Remarkably, 21 Bridges is stacked with a capable cast so there are no slouches involved in this generic cop thriller. However, the material feels stretched out and leans on the same old familiar tropes of corruptible cops, exaggerated body counts, and exaggerated gunplay–all thrown to the wind in an effort to concoct a stimulating police actioner that stiffens as the plot marches forward.

New York City detective Andre Davis (Boseman) is a convenient hybrid of John Shaft and Dirty Harry Callahan–a suave protector of the people that is not too shy about blasting away the riff raff. Naturally, the police department has their issues with the often investigated Davis and his methods for shooting first and asking questions later. We get it…the means streets in the Big Apple sometimes warrant a renegade such as Davis to apply his brand of angst-ridden justice.

There may be justification for Davis’ kind of shoot ’em up philosophy after all when a major drug-related crisis unfolds involving a couple of low-grade offenders (“If Beale Street Could Talk’s” Stephan James and “Only the Brave’s” Taylor Kitsch) swiping a generous stash of cocaine as they blast their way to freedom. The result of their dirty deed has them now on the run as notorious cop killers (a handful of officers perished during their bullet-ridden escape). So now Davis is tasked with conducting a manhunt around the city in order to capture the deadly culprits before they permanently disappear from the city limits.

So now Davis and his partner Frankie (Sienna Miller from “American Woman”) must devise a plan to apprehend the devious duo before they disappear from the Manhattan boundaries for good. Davis reasons that by shutting off the surrounding bridges within the enormous city confines could definitely deter the treacherous tandem from completely getting away scot-free. With time of the essence Davis and Frankie have mere hours to catch the fleeing criminals. The undertaking of this mission is overwhelming as the massive region and its density of New Yorkers will present a difficult challenge to the detectives in finding the cop-killing cretins.

The situational dilemma is established as Kirk yearns to tap into the so-called edginess of the dogged detectives’ fate. The badges are up against the critical clock and the pressure to apprehend the felons responsible for recklessly spilling the blood of fellow cops is mounting by the moment. Sadly, 21 Bridges is a standard actioner that really does not resonate beyond the arbitrary “find the naughty needles in the haystack” gimmick posing as an edge-of-your-seat narrative. The intended intrigue in using the broadened Manhattan as an expansive lockdown backyard had potential but the tepid story never really supports the gritty approach to such a predicament. Instead, Kirk opts for the arbitrary trappings of a by-the-dots police procedural feigning a sense of urban urgency.

No doubt it is a win for Boseman to headline his own turbulent cop melodrama. After all, the action policing genre starves for someone of his box office magnitude to add some feisty flavor after his larger-than-life turn as the transfixing Black Panther. It is too bad for Boseman and company that the weak waters flow so choppy under 21 Bridges.