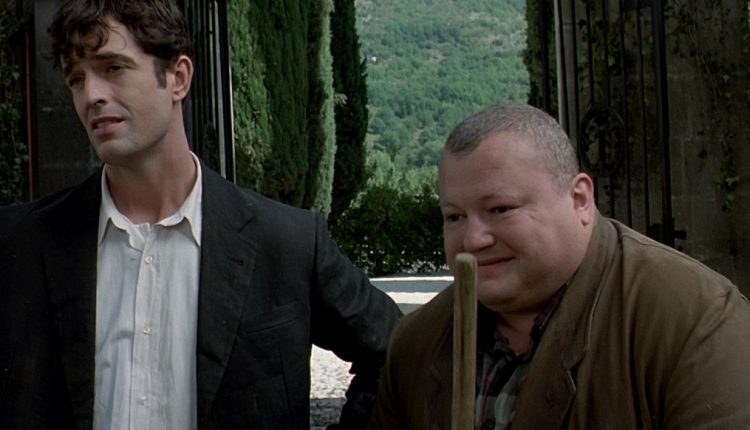 Cemetery Man is a zombie movie, but it’s one unlike any other I can think of. It is, in fact, a perfect zombie movie to show someone who thinks that all zombie movies are basically the same shambling gorefest, from one film to the next.

Based on the novel by Tiziano Sclavi, director Michele Soavi crafts a masterpiece of existentialist horror, helped by writer Gianni Romoli and a pitch-perfect lead performance from Rupert Everett. The fact that the lovely Anna Falchi is also here, bewitching the male gaze with her consumate loveliness, is also a big plus.

Everett plays Francesco Dellamorte, aka the cemetery man. He looks after the dead. More importantly, he takes care of the dead when they rise up again, on the seventh night after their death. His existence is a lonely one, with most of his time spent in the cemetery in the company of his assistant, Gnaghi (François Hadji-Lazaro). Gnaghi can’t really speak more than one word, and his placid, childlike nature makes him an ideal person to help Francesco and share in the secret duty carried out in the cemetery. Things start to become complicated when Francesco falls in love with a beautiful woman (Falchi), leading to events that will have him questioning his life and his role as a dealer of death.

Sarcastic, exhausted, unhinged, and desperate are the words that I would use to describe Francesco, and all of these traits are expressed perfectly in the performance from Everett (one I would be tempted to call a career-best). Hadji-Lazaro does well in his supporting role, especially in the moments that hint at his character not being half as dumb as he appears to be, and Falchi is so gorgeous that it doesn’t matter when she’s given the most bizarre character developments.

As good as they all are, however, the cast are really just pawns moved in place by Romoli and Soavi. The director provides a succession of gorgeous imagery, with the main cemetery design an absolute triumph, and the design of every shot is atypically artistic for this sort of fare. The dialogue isn’t always as smooth as it could be, but that’s not a problem when you start to get your head around the ideas being toyed with. Francesco can’t decide what is worse, the dead coming to life or the living who are just dying over time anyway, and he starts to create a moral quagmire for himself when he stops seeing much difference between the two. But don’t worry, all of this thoughtful existentialism comes without any loss to the actual zombie action and bloodshed.

I hope this review is enough of a push for anyone who has yet to see the movie, and I didn’t even mention the relationship that involves one main character and a decapitated head, the zombie biker sequence that echoes Psychomania, or the ending that is as brilliant as it is bizarre.