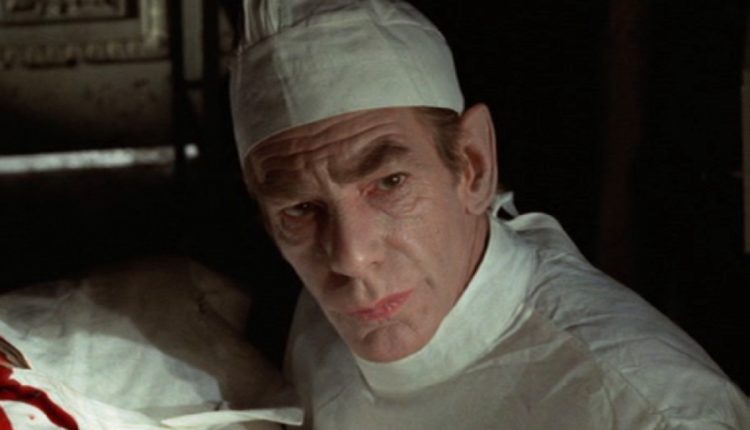 A fun, delirious, British exploitation movie, Horror Hospital throws everything into a big melting pot, and is all the better for it.

Michael Gough is the evil doctor at the bloody, beating, heart of the whole thing, while Robin Askwith and Vanessa Shaw play the two young folks who end up staying in his lair. Although things start off innocuously enough, it’s not long until the two are queued up to go under the scalpel.

Directed by Antony Balch, who co-wrote the script with Alan Watson, the emphasis here is on fun. To hell with logic, subtlety, or any sense of realism. This is a film about people who are decapitated by a blade-fitted Rolls Royce. It’s a mad scientist movie in which the big house in the country may as well be The Island Of Dr. Moreau. There’s a diminutive assistant (played by Skip Martin), there are a number of guards who spend time either standing outside doors or riding around on motorbikes, and there’s no small amount of tinkering with human brains. The dialogue is appropriately silly, as are quite a few of the character moments (the sex scene, in particular), but the technical side of things is all competent enough, with good humour and inventiveness compensating for the relatively low budget.

Askwith is the same as he always is, which may influence how much you enjoy the movie. He’s supposed to be a cool cat, to use the lingo of the time, and likes to chance his arm with the ladies. Shaw is a more enjoyable presence, leading to a slight dip whenever she’s not onscreen. But this kind of movie always stands or falls by its villains, which is why it’s good to see Gough and Martin having so much fun, as well as Ellen Pollock (who plays another assistant to the evil doctor). Completely in line with the overall tone of the film, Gough delivers every line with barely-contained sadistic relish, portraying his character like some kind of Bond villain who has been driven demented after years of having all of his plans foiled.

An easy film to dismiss, and an easy film to point and laugh at, it’s also one that deserves to be loved. It’s like a Roger Corman movie that’s been soaked in a British stew before having a standard Hammer horror movie ending tacked on. And I hope that strange brew will at least allow it to continue building a cult following. I know that I will be recommending it to anyone who shares my eclectic taste in horror movies.