A new adaptation of an old tale, 47 Ronin is a flawed film, yet not without some enjoyable moments.

Carl Rinsch makes his feature directorial debut, after a number of shorts that seem to have shown some great potential (according to the feedback I could find on them), and he doesn’t do a bad job. He just doesn’t do a great one. It would be easy to lay the blame for the failings of the film at his feet, but I think it would be unfair, in this instance. There seems to have been a fair bit of studio interference, and there’s every chance that numerous execs continued to offer suggestions and improvements to a movie that ended up being all the worse for their input.

The story is, in essence, a simple one. A bunch of samurai are left without a master when he is bewitched and led to death. A samurai with no master is called a ronin. There will, eventually, be 47 of them fighting overwhelming odds to avenge their master and restore honour. I don’t think that’s a spoiler. Also, in amongst this group of men stands Keanu Reeves as a mistrusted “half-breed” who might just be the most valuable member of the team. 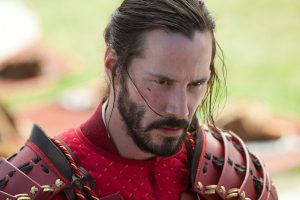 A strange film that falls between two stools, 47 Ronin is, on the one hand, a serious drama about honour, self-belief and other admirable traits, and on the other hand it’s a bloodless bit of action fun with nimble fighters and magical creatures popping up now and again.

I like Reeves, and he’s good here, even if he’s repeating shades of Neo, albeit in different clothing. Hiroyuki Sanada is decent as Oishi, the man who leads his men into battle against a seemingly unbeatable enemy, and Ko Shibasaki is pleasant enough, even if she’s not given much to do. Tadanobu Asano and Rinko Kikuchi make good villains, and it’s always good to see Cary-Hiroyuki Tagawa in a movie (if the name doesn’t ring a bell, you will recognise him when you see him).

While the cast and direction are serviceable, the same cannot be said of the script, which feels very much like some reheated leftovers without any sauce added in to pep it up a bit. Yes, this is a new version of an old tale, but there’s no reason for it to unfold with so little enthusiasm. Even the one or two sequences that could be great simply end up just fizzling out to nothing.

Some will find this worth a watch, I guess, but considering that there are 101 similiar movies I could recommend you watch ahead of it, I must advise people to put this one low on their list of viewing priorities.

47 Ronin hits shiny disc form on 12th May here in the UK.

Win The Secret In Their Eyes DVDs