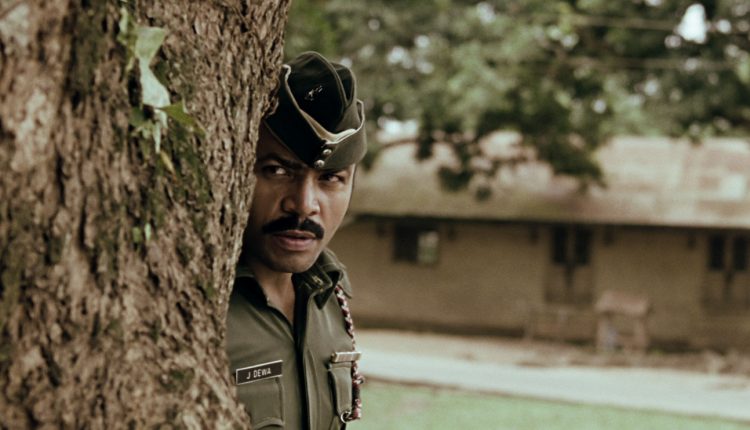 There’s a lot of ambition in ‘76, painstakingly pursued over multiple years. Nigerian director Izu Ojukwu’s foray into the past took a long time to clear with the military given it focusses on an attempted coup that led to the assassination of the head of state in 1976. Attempting to use an officer and his wife as a window into this time, the film itself is a mixed success, stumbling over technical failings and a flat second half.

As a period piece, ‘76 nails the 1970s aesthetic, sometimes a little too convincingly. Washed out colours and a slightly grainy texture give it the look of a period piece. Over-egged acting and a penchant for volcanic eruptions, all bludgeoned by overbearing musical cues, make it seem a little too much like ‘70s television. Sound is a problem throughout. The level falls and rises, sometimes during the same conversation, and music often drowns out dialogue. Errant mic handling also leads to a few scuffed noises as something scrapes against it.

Ojukwu is much more successful in evoking the mood of the time. Coming not long after a messy Civil War, tensions abound. Army officer Joseph Dewa (Ramsey Nouah) lives on base with his heavily pregnant wife Suzie (Rita Dominic). He seems a decent man if one prone to the odd outburst, though not without provocation. Persistently loud music from next door draws his ire, as does the obvious dislike from Suzie’s family, mostly along tribal grounds.

Bigger problems lie ahead as he’s unwittingly recruited into a coup, except Dewa wants no more bloodshed and won’t play along. The best moments come in an extended game of hide and seek, Dewa attempting to get out of the base and alert the authorities while pursuers circle in jeeps trying to hunt him down. It’s played carefully, ratcheting up tension without rushing. Nouah aids the moment, mixing fear into his character’s taciturn discipline. He’s a good foil for his more open wife who wears frustrations, often with him, more openly. Dominic does an excellent job at working her character up into a lather without hyperbolic emoting.

Unfortunately, even with Dominic’s good work, ‘76 falters when attention turns to her in the second half. With Joseph implicated in the coup he’d tried to prevent, Suzie works through concern, rage and then determination as she tries to gather evidence to save her husband. Joseph disappears almost completely from the picture, the pace, never fast, retreating with him. Attempts to inject excitement into what becomes a bit of a trudge also fail, coming across as forced. The arrival of a long lost family member is the most egregious example, dropped in to clear up a misunderstanding only introduced a short time before and then sidelined.

Ojukwu, a veteran of the burgeoning Nigerian film industry known affectionately as Nollywood, is a capable director, something he demonstrates in the best moments of ‘76, but an unwieldly split narrative derails his ambitious effort until it’s left to drift slowly towards an unsatisfactory conclusion.