Epilogue is my second encounter with the work of writer director Layke Anderson, whose debut film, Dylan’s Room (2012), was an impressive study in grief, balancing sentiment with a finely judged sense of humour. The tone, overall, was bittersweet, and wonderfully so.

Epilogue is a different animal altogether.

Dark, deliberately paced and technically accomplished, it focuses on a woman, Estelle, sitting quietly at the bottom of the stairs of her beautiful, Christmas-lit house. We don’t know her, and yet she stares, a piercing, haunted gaze to camera, as if she knows us,. And as she does, the camera begins to slowly, deliciously, pull back, accompanied by a voice over, revealing her inner thoughts. And it is from this voice over that the story begins to unfold and we, the audience, begin to realise just who this woman is, and more importantly, what she has done.

Simplicity, so said Bruce Lee, is the key to brilliance. And while Epilogue doesn’t contain any martial arts or eastern mysticism, the quote is extremely relevant to this piece.

To begin with, the film is done in one long, unbroken shot, the camera fixed to a gimbal and moved, with masterful precision, by camera operator Adrian Ardelean (whose work here is so smooth that the man deserves no less than a name check). The effect is mesmerising, creating not only a nightmarish quality, but adding layers of subtle meaning, as the environment in which the woman sits comes into focus, along with the story. Director of Photography Jean-Paul Berthoin, lights with a no-nonsense approach, but utilises the pinks and greens of the Christmas tree lights, crafting a mis en scene of surreal naturalism.

The visuals are complimented by a gorgeously layered score by Justine Barker, which adds a thick slice of mood to Anderson’s vision.

And what a bold vision it is. 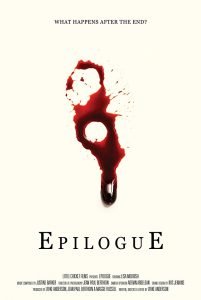 It takes a great deal of confidence to direct a film such as this, to trust in performance and the power of dialogue. Anderson, however, is more than up to the task, his script essentially a talking head monologue, without the hindrance of moving lips. It’s a confessional, both deeply personal, and surprisingly moving.

A lot of that is down to Lisa Moorish as Estelle, who delivers a performance of impressive restraint. Tasked with portraying a woman shattered by a violent event, she is powerful, yet subtle, while her voice over is immaculate. It takes a lot of talent to play pain this raw and exposed.

Beyond the bombast of many ‘issue’ driven pictures, Anderson understands that the internal struggles are always the most compelling. His film actually reminded me of Denise Papas Meechan’s Freckles (2016), another recent short, that focused on a similarly damaged woman, pushed to the edge (they’d make for a fascinating double bill).

Films such as these are becoming disturbingly relevant, it would seem. Anderson’s film is coming at a prescient time, when women around the world are standing up to be counted. And yet, just as Estelle’s actions are revealed to be inevitable, so is the darker realisation that there is no satisfaction in her actions, just a world weary blankness that says ‘I’ve always been here, you were just too blind to see it.’

Art, it would seem, can often get to the heart of matters. In Anderson’s film, one six minute shot manages to say more than many mainstream pictures of three hours.