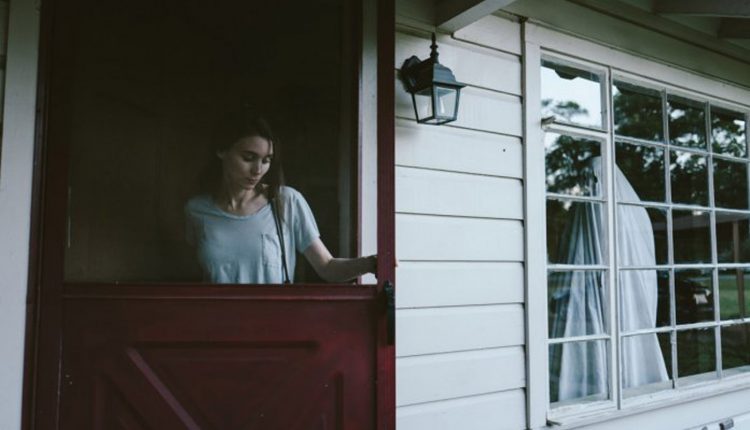 Expectations of David Lowery’s A Ghost Story before embarking on the picture, to most, are that of a horror story, but this tender circle of eternity love story couldn’t be further from the normal perception of a horror story. The horror lies deep in the heart of one’s soul mate ripped cruelly from this mortal coil and the longing to have them back in the soft safe space of their arms.

At only 94 minutes, a rare running time for a cinematic journey, Casey Affleck’s ghost, portrayed as a single white sheet with two foreboding holes cut out for the eyes, skipping through eternal time at lightning speed, confined to the land which was once his home he shared with partner Rooney Mara, witnessing people come and go, longs for his love to come back to him as the world changes around him.

Lowery’s ambitious tale starts with Affleck and Mara, a young couple living in the suburbs, like chalk and cheese the young couple have different ideal’s about their life together, whilst Affleck is a budding music maker, tinkling away on his computer producing trance like beats, he loves being where they are, however, Mara dreams of a life away from the quiet solitude of their home, adding the tension and the question how long will this relationship last until fate plays its cruel hand and kills Affleck in a car accident.

Drenched in lengthy continuous one shot scenes, the first comes with Affleck, lying in a mortuary covered in a sheet as Mara, enveloped in grief, identifies his body before making a quick exit. Not able to look away, drawn in by the eerie and atmospheric score, a motionless Affleck lays on the slab for what seems like an age before sitting bolt upright, before exiting the hospital to make his way home. The other notable scene although simple, it is truly affecting. After a friend delivers a pie to her grieving friend’s house, Mara proceeds to dig into the pie, taking a seat on the floor shovelling mouthful after mouthful into her mouth eating her grief away, completely  connecting to and mesmerising the audience into wondering how her slight frame could devour that amount of food as Affleck’s ghost watches on.

As the days turn into years Affleck simply cannot accept his situation which binds him to the space of his home. Mara inevitable leaves their four walls, which hits Affleck hard as a Hispanic family move in, his own loss turns into anger which scares the family away resulting in a string of inhabitants arriving including a group of hipsters. Holding a hedonistic party, one, in particular, gives his own prolonged and chilling opinion on mortality and all the whilst he can do nothing but watch.

The question of what happens after we die and a simply lost love is the very foundation of the story, it’s immensely profound and will leave a deep impression embedded within in the soul especially after the last third plays out in a surprising twist of in an even heavier emotive quest of mournful love and connection. Disclaimer: if you are already feeling the blues, this

A Ghost Story is in cinemas August 11th