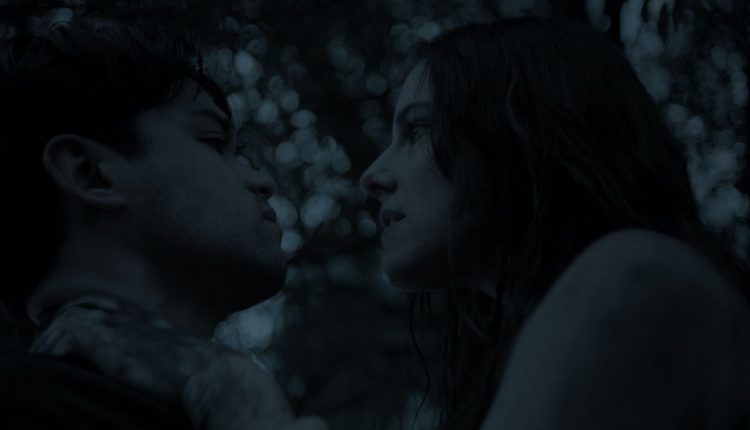 Nora Unkel’s feature film debut A Nightmare Wakes re-imagines Mary Shelley’s creation of her iconic novel Frankenstein, turning the foundations themselves into a tale of horror and heartbreak. The film’s principle idea is that Frankenstein was born from Mary’s fears of her own inner monstrousness; the fear that she is unable to bring about life and thus, is deemed unlovable.

Mary’s struggles with birth and death are brought to live in a carefully handled and subtle portrayal. We are shown hallucinatory fantasies, where Mary’s shattering psyche makes way for her troubling tale of monsters and men. Her own clashes with the patriarchy are shown in Percy’s lack of support and his hints at her madness. However, Mary believes he is merely jealous of her writing talent and threatened by the strong woman she has become. The more she progresses with her story, the lesser her grip on reality and the more paranoid she becomes. Mary yearns for Percy’s touch and believes he’s romantically involved with her sister. Mary’s desire to be loved as much as she loves bears a strong resemblance to Frankenstein’s monster, a misunderstood creation that decides “If I cannot inspire love, I will cause fear”.

It’s a touching and sad story, but very easy on the horror. The promised nightmare never truly awakens and as the film reaches its final moments, you might be left wondering if it was a horror film at all. Sure, there are fleeting moments of quiet terror, particularly surrounding the film’s more dreamlike moments, but there’s not much to be afraid of. Unfortunately, this is more historical narrative than horror story and one that doesn’t leave too strong a lasting impression.

Alix Wilton Regan plays the role of Mary Shelley with vigor, portraying a woman bursting with strength to the surprise of the men around her. “What happened to the woman I ran away with?”, Percy wonders, “She woke up” May replies in earnest. Regan’s leading performance is understated and careful, but bubbles with passion in a way that reflects the bygone era that the real Mary spent her life. There is a string-heavy score from that bursts with power and drama, complimenting and emphasising the film’s focus on feelings of yearning and emotion.

Nora Unkel’s suitably feminine touch can be felt in A Nightmare Wakes’ preoccupation with motherhood and the horrors that arise during childbirth and what follows. The idea of physical and psychological trauma is neatly interwoven to draw on its audience’s sympathy for Mary. She’s a woman on the edge and it’s never certain how far she will go during her emotional turmoil. Personally, I’d have liked to see the film go further in this sense and to push its audience right to the edge. However, A Nightmare Wakes teeters on the brink of being truly terrifying, never forcing us into anything too traumatic.

A Nightmare Wakes is a strong directorial debut and I am excited to see what Unkel does next. Perhaps a re-imagining of a Universal Monster movie should be handed over, because I’d be interested to see how she brings Dracula or a Mummy to life.