She was herself yet not herself, says the conned artist in Breillat’s neat, elegant memoir

Again Breillat has made a neat, elegant, beautiful film, this time even more than usual intimately autobiographical. She really was disabled by a major cerebral hemorrhage and followup epileptic seizures, and when at home from the hospital sought out a self-declared jailbird and con man she saw on a TV show. She made him part of her life, became dependent on him, and he conned her out of about 800,000 euros — maybe almost €1 million. It all happened eight years ago. The film is a picture both classic and unique of what it’s like to be this kind of victim. And incidentally Huppert is remarkably adept at mimicking post-stroke disabilities. The story’s uncomfortable to watch, necessarily so, and arguably also a bit narrow. But it rings true and is a good account of the experience of being conned, as well as a remarkable performance by Huppert. 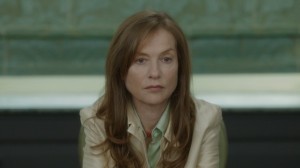 Though Breillat likes to work with unknowns, that may not have been a real option for someone to play her alter ego here. If you were a famous French artist who’s both stubborn and arbitrary seeking an actress to play yourself you’d need not look beyond the celebrated Isabelle Huppert, and Huppert delivers even more balls and panache than usual for this performance, which somehow seems both flamboyant and understated, the paradox a product of Breillat’s succinct self-characterization. 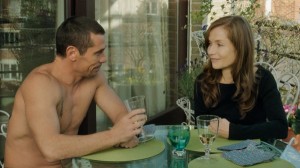 First Maud (Huppert) falls out of bed, crawls to a phone, wakes up in hospital, and learns she’s disabled, her left arm flopping up in the air, her legs weak and unstable (we don’t see physical therapy). At home, her body “half dead,” facing a new solitude. On nighttime TV Maud spots Vilko Piran (muscular, tattooed, middle-aged French rapper Kool Shen) and calls her working partner Ezzé (Christophe Sermet) to tune in. They agree his baldfaced crudeness is priceless for the part they’re casting, and before long she has him over and he agrees to act in her next film. He promises to spend a lot of time with her. She never is with actors before shooting, she says, but in this new situation…. the bold, outrageous Vilko, who wears nice clothes and boasts “chugging” Chateau Petrus, is soon spending time with Maud nearly every day and becomes her “slave.” 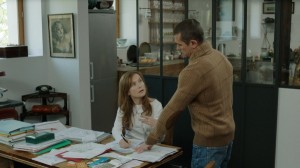 The part that rings true is that the victim gets value from the victimizer, albeit for excessive cost (Maud feels abandoned by family and needs Vilko’s company and his physical help); that the victimizer needs and may deeply care for his victim, thus “kills the thing he loves”; that the victim knows she is being conned, yet goes along with it; that the relationship is an intimate and strangely “caring” one. In this case, especially with Huppert in the role, the victim largely seems stronger than the victimizer, and Vilko acknowledges Maud’s “balls.” 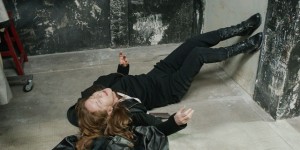 As Peter Debruge notes in his Variety review — to which you may refer for background details such as what movie Breillat would have made, who the real con man was and what legal action she took — Breillat’s habit of casting “real” people, showing a misguided distrust of actors and leading to limited performances, further backfired in a major way in this experience. Such limitation marks the turn here by non-actor Kool Shen, whose behavior in scenes is rather one-note. In contrast Huppert’s mastery makes her performance look so easy you may not at first notice how complex and contradictory her Maude is, powerful as well as frail, as sympathetic as she is chilly and off-putting.

But this is a hard movie to describe. The succinct fresh rawness of it is underlined for me by the way Maud simple clicks off her cell phone whenever she’s done talking, without a goodbye.