If My Accomplice was a human being then it would be a nice, friendly person. The sort of person desperate to please everyone. It would know people everywhere. When you bumped into it in the street it would introduce you to everyone else around, with no thought to your schedule, or to the fact that you might not like everyone else around. It would do this every time that you met, leading to you planning your journeys. You wouldn’t want to bump into it any more. You don’t have time for more inane chat and introduction to every Tom, Dick and Harry. You start to hope that it upsets the wrong person, which then leads to it getting a punch in the face (if a movie can have a face, which this one can . . . . . . . . as it’s in humanoid form). Not because you REALLY wish harm upon it, but because it may be the only way that it learns to change its ways.

From writer-director Charlie Weaver Rolfe, this is a simple romantic comedy starring Stuart Martin as Frank, a young man who falls for a woman named Ilse (Alexandra Kalweit) when the two of them meet on a bus journey. As they both live in Brighton, it’s only a matter of time until they start to bump into one another. This is a movie, after all. Frank is busy working with disabled people, a job he seems to enjoy, while Ilse works away in a cafe that allows her to exist until she can get home every day to unleash her artistic side. The two of them get along splendidly, but doubt inevitably sets in. 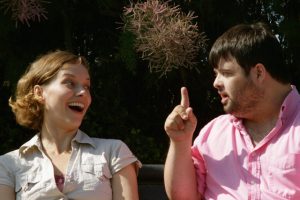 Let me just say, before I forget, that Martin and Kalweit are great in their roles. Both are easy to like, and viewers should want them to get together. They could have just as easily been annoying, due to the quirky nature of the material, but they overcome the script thanks to their winning performances. The same can’t be said of Alan Gilchrist or Dimitrina Elliott, two main supporting players saddled with characters that feel completely extraneous. Kevin Wooley, although equally unnecessary, does better with his small role, but this is a small film that would have been greatly improved by keeping tighter focus on just the two main characters. On a side note, whenever Wolverine needs to be (inevitably?) rebooted/recast then I put forward Martin as a great contender for a younger incarnation of Hugh Jackman to make the transition as easy and painless as possible for fans.

It’s a shame that Rolfe seems intent on undoing the whole thing with musical interludes, quirk piled upon quirk to create one irritating pile of uber-quirkiness, and a lot of amateur errors. He’s clearly wanting to make Brighton as much a main character as Frank and Ilse, but he fails in that regard, mistaking the aforementioned quirks for local colour and character.

If you want a hint of romance and a few laughs in Brighton, I recommend taking your partner there for a long weekend. I’m sure you can catch a local comedy act. It might be awful. It might, however, end up being much better than this.