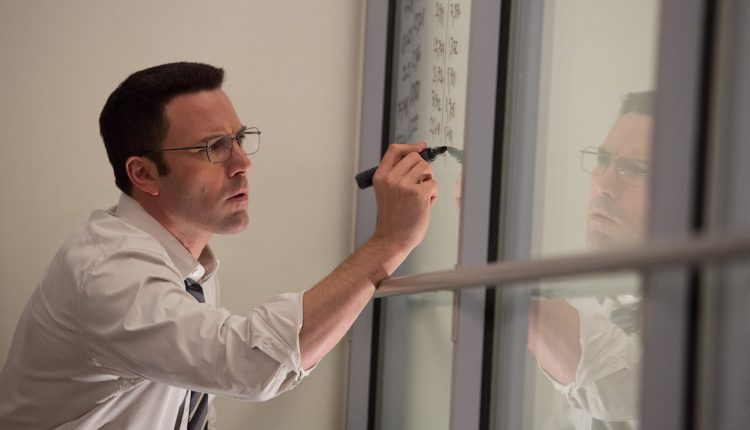 After two disappointing outings as an antihero – in 2003’s disastrous Daredevil and this year’s overblown Batman V Superman: Dawn of Justice – Ben Affleck must be hoping it’s third time’s the charm with this clunky and transparent attempt to give autistic youngsters their very own cinematic action hero.

On the surface, Affleck’s titular number cruncher Christian Wolff appears to be your garden-variety everyman. A middle-aged, middle class suburbanite, he runs a small accountancy firm in a quiet town and helps the local farmers work the tax system just enough to make ends meet. But like almost any superhero you’d care to mention, Christian also has an extraordinary alter-ego that belies his modest day job.

You see, Christian has a highly-functioning form of autism. And in cinematic terms that means he’s not just a gifted math whizz who struggles with social interactions; he’s also a highly-skilled, incredibly deadly assassin who uses his Special Set of Skills to uncook the books of some of the most dangerous criminal organizations around the world. But when the Treasury, led by J.K. Simmons grouchy agent and Cynthia Addai-Robinson’s plucky rookie, starts sniffing around his shady affairs, Christian reluctantly agrees to track down some missing millions for a legit robotics company in the hope of throwing his pursuers off the scent.

What follows is a lunkheaded cross between an intolerably dry finance drama and a wacky action thriller as Christian and Anna Kendrick’s naive junior accountant uncover an internal embezzlement scheme that can only be brought down by crunching fist-fights, exuberant shoot-outs and a trash can full of magic markers. These John Wick-esque fight scenes are where The Accountant is at its most entertaining by far, turning Affleck’s rigid pencil-pusher into an outlandish action hero as he glides through moves with silky smooth precision, rolling, ducking and grappling through a hail of bullets and racking up a body count that would make Keanu Reeves baulk. It’s only when director Gavin O’Connor (Warrior) tries to draw deeper meanings out of his nonsensical plot that the film starts to falter.

Of primary concern is what exactly O’Connor is attempting to say about people with autism. On the one hand, The Accountant gets a lot of things right in its depiction of the condition. Christian is uncomfortable with eye contact, struggles with social cues and flies into a tantrum whenever he is unable to complete a task. Most refreshingly, he also learns to modify his behaviour in order to cope relatively comfortably with everyday life.

But then we get to those schlocky dust-ups in the films final third where Christian enters full Kill Bot-mode, which seems to confuse a difficulty in expressing empathy with the inability to actually feel it. There’s certainly an argument to be made for this type of bonkers action hero using Asperger’s as his super-power, but the suggestion that Christian is somehow abnormal because of his condition sits uncomfortably with his otherwise rounded portrayal.

Affleck at least makes a decent fist of the role, convincing as both a calculated mercenary as well as handling his character’s more emotional beats, but his supporting cast sadly lack shading and believable motivations to really register. The financial conspiracy side of things also underwhelms, relying heavily on cliche-riddled plot twists, while the infrequent flashbacks to Christian’s troubled childhood with a stereotypical military father – who of course tries to toughen up his son using martial arts training – seem to express an unsettlingly crass notion that we should be surprised a person with autism would care about his family.

There are a lot of bold and ambitious ideas driving The Accountant but an inauspicious combination of botched revelations and muddled characterization makes following it more confusing than filling out a tax return and only marginally more fun.

A Star Is Reborn…