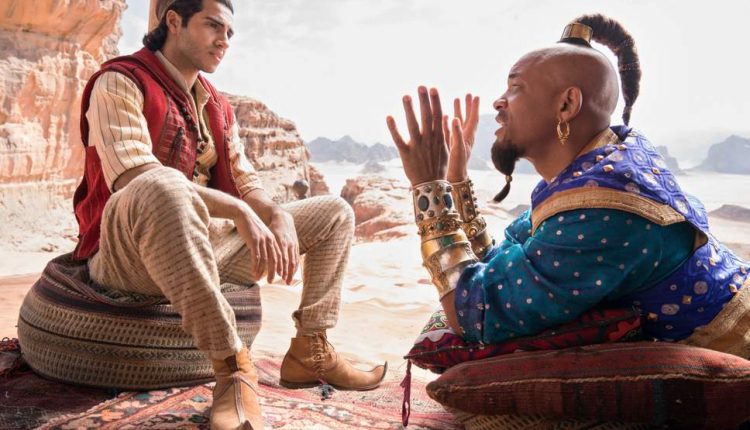 Upon its release in 1992, Disney’s Aladdin made history. It not only became the first animated film to earn more than $500 million at the global box office, but it was also the highest-grossing film of that year. Given the popularity of the film and its franchise, it is no surprise that it is the latest film to get the live-action treatment.

Aladdin marks a different creative direction for British filmmaker Guy Ritchie, who is better known for his comedic and gritty films. However, his last feature – King Arthur: Legend of the Sword – underperformed at the box office. In addition, its failure led to the cancellation of a planned film franchise, so it is as much of a gamble for Ritchie as it is for Disney.

Aladdin‘s biggest issue is competing with the nostalgia of the animated feature. This is largely due to Robin Williams’ memorable vocal performance, so casting Smith – more known as a rapper than a singer – as the Genie raised eyebrows. Add to this the debatable cultural authenticity of Naomi Scott (Jasmine) and a seemingly Bollywood take on the original Middle Eastern folk tale and it looked doomed from the start.

Arguably Ritchie’s most ambitious project so far, his foray into musicals is uneven in places. Several anticipated musical pieces feel forced and any fluidity built up in the narrative is interrupted by unnecessary comedic moments or overelaborate dance scenes. It is these instances that highlight his inexperience in the genre and some inconsistent CGI make it all to easy to distract audiences.

Thankfully, Aladdin is not a shot-for-shot remake, which gives Ritchie room to provide his own unique take. In turn, he incorporates little touches amid clever chase scenes and entertaining dialogue to lift the film. In addition, he and co-screenwriter John August use this opportunity to feature further character development to expand Aladdin past its ‘hero versus villain’ label. Jasmine and Jafar are notable examples – each of them refuses to be pushed aside and wants to rule Agrabah. However, Jasmine is empowered by her duty as the princess while Jafar is driven by the need to be the best, making a somewhat one-dimensional villain – this isn’t helped by Kenzari’s subpar performance. This conflict between traditional and modern attitudes is a much-appreciated addition to the narrative, showing that princesses have more to offer than being a love interest.

Rather than be cheeky and full of bravado, Mena Masood’s Aladdin is driven by a need for survival, making a humble and grounded hero. He also shares a natural chemistry with Scott, whose singing and acting abilities make her a standout. And Will Smith’s Genie? Thankfully, he doesn’t try to replicate the boldness of Williams. Instead, he incorporates his stage presence to offer an updated, sophisticated Genie that delivers in comedy and poignancy.

Overall, Aladdin is not a total disappointment – there are parts that don’t sit right but it is mostly a bright, fun-packed adventure.