This movie is a one-time big-screen outlet for Steve Coogan’s comic creation, originally (1997) radio, later TV. Alan Partridge is a Norwich-based radio emcee. The vain and obliviously tactless character in this iteration is called upon to serve as an intermediary when the radio station North Norfolk Digital” bought out by a multinational conglomerate and is about to be re-branded as “Shape.” The station is subsequently subjected to a siege by Partridge’s Irish colleague, Pat Farrrell (Colm Meaney) when he’s let go in the process. “I’m Alan Partridge” was originally a BBC situation comedy starring Coogan with two series of six episodes each were produced — the first in 1997 and the second in 2000 (though Alan Partridge seems to go back to 1995). 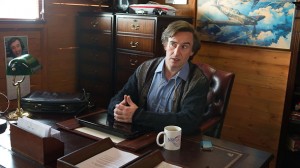 This film, which got its North American debut at the prestigious and selective New York Film Festival is nonetheless very broad comedy material, and very English as well, as Coogan was first to point out at the New York festival Q&A. Coogan is an inspired comic, and he’s most known in the US from performances in several films directed by Michael Winterbottom. Winterbottom’s Tristram Shandy: A Cock and Bull Story, featuring Coogan, was part of the 2005 NYFF. Before that, Coogan had a lead role in perhaps Winterbottom’s most celebrated feature, 24 Hour Party People (2002) Coogan was also very funny more recently in Winterbottom’s The Trip, again a big-screen version of comedy from the Tube. Somewhat to his chagrin, Coogan often has minor roles in feature films, but he’s nearly always very droll in them. I recently enjoyed him a lot, perhaps from knowing there’s more there than shows on the surface, as the irresponsible art dealer husband Beale in an American film, Scott McGehee and David Siegel’s contemporary version of Henry James’sWhat Maisie Knew. 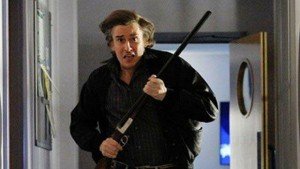 This feature film version of Alan Partridge relies on extreme situations and sometimes crude, scatological, or slapstick humor. It’s more a series of jokes than anything else. It seeks, more or less successfully, to strike a balance between the triviality of a radio or TV sit-com and a serious film. It doesn’t stray very far from its basic venue, the radio studios (which eventually become surrounded by onlookers, TV cameramen, journalists, and police). It stays parochial. Coogan explained that a comedy involving a siege by Al Qaeda was included, but that would have strayed onto dangerous ground. In the film Partridge warns a colleague not to joke about Islam. Christianity a lot, sure; Judaism a little. Islam, never. 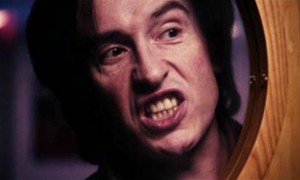 Despite its broadness, Alan Partridge is anything but just sight gags. It’s most of all a lot of profane, outrageous, rapid-fire verbalhumor — an intricate kind the Brits have a special knack for. It’s therefore not a surprise to see the name of Armando Iannucci among the writers (who include Peter Baynham, Neil Gibbons and Rob Gibbons) and to remember that Coogan was included in In the Loop(2009), and Ianucci was deeply involved in the very fast, very witty, very political The Thick of It (2005).

This movie is sort of political, though not on the level of those two TV series/films: it’s about a corporate takeover. That’s economics, anyway. But the event is largely a pretext to display Partridge’s ego. When he learns a downsizing is coming under the new owners of the radio station, he fingers Pat Farrell, and Farrell indeed gets cut. The irony (or one of them) is that Partridge should be sent in to placate the shotgun-wielding Farrell, when the latter is pretty likely to catch on at some point that this mediator is the root cause of his humiliation. Meanwhile Partridge, whose ego is forever way bigger than his talent, sees how his new role in the news as a local savior has greatly increased his fame, and concludes it’s well worth his while to prolong the siege of the station as long as possible so he can stay in the limelight. 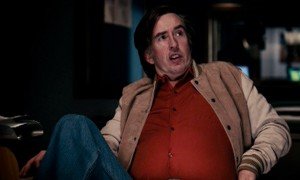 The many secondary characters are all sterling in this film, as has always been typical of British comedy and cinema. However the problem remains that however hilarious the lines and risible the action this is an enlargement of small screen material to a space where it looks a bit pushed. Certainly this is by no means an unworthy version of Coogan’s most famous comic character, but it remains true that the character is better and larger than anything on screen. (The Irish-born director Declan Lowery has primarily worked in TV.) 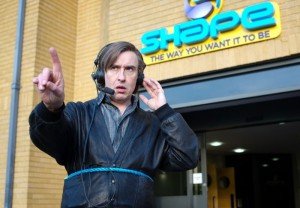 Whether this is a movie worthy to be included in the elite and selective New York Film Festival is a question to be left up to the historians. Certainly the NYFF has included less important and less worthy stuff, and Coogan is an alumnus. The choice also fits in with the new Program Director Kent Jones’s (or this year’s Jury’s) revealed penchant for English comedy, resulting in inclusion of Roger Mitchell’s Le Week-End, a sardonic senior citizen relationship comedy, and Richard Curtis’s sci-fi fantasy rom-com, About Time. Each fills a different space in the British comedy spectrum.