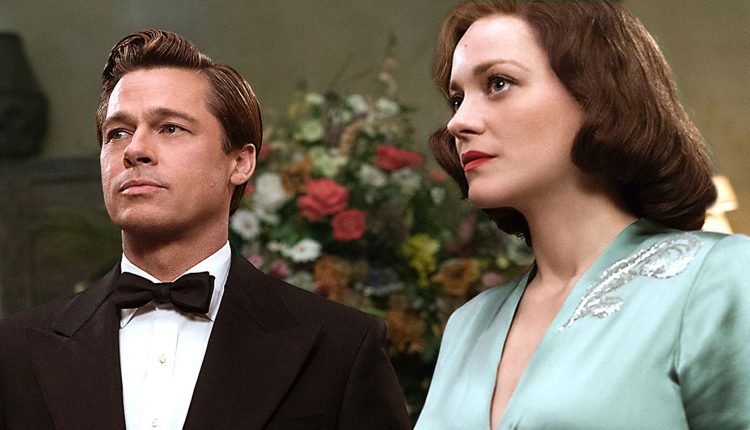 Sybil Vane once remarked that actually falling in love destroyed her ability to create romance on stage. If it really is true that real-life romance can’t be replicated on screen, then maybe there’s more to those opportunistic rumours about Brad Pitt and Marion Cotillard’s off-screen affairs on the set of Allied. They might be playing World War Two spies who fall in love during a dangerous mission but, on camera at least, Pitt and Cotillard struggle to conjure the sizzling chemistry needed to put the spark in this clunky and laborious war time thriller.

The action kicks off in Casablanca, 1942, where Pitt’s dashing Canadian pilot parachutes into the dessert and sneaks into enemy territory. His contact takes him to a Gilda-style nightclub to rendezvous with beguiling French agent Marianne Beausejour (Cotillard) who will pose as his wife.

Although it tries to ape the misty-eyed romanticism of Casablanca and Notorious, Allied’s central pairing fail to convince as a passionate coupling. Cotillard is enticingly enigmatic as the smart and vivacious Marianne but Pitt’s wooden portrayal of the more stoic Max is simply no match for her sultry charms. It’s simply too hard to believe these two would hop into bed together.

And yet they are soon fumbling with each other’s clothes as a dessert storm swirls outside their four-wheeled love nest and before we know it they’ve relocated to a Blitz-ravaged London, got married and had a baby daughter. It’s here in war-torn Britain that Robert Zemeckis’ otherwise pedestrian direction really springs to life, especially during one rare bravura sequence where Marianne gives birth amid a hail of Luftwaffe bombs.

The couple’s domestic bliss is swiftly spoiled, however, when Max is hauled in front of his superiors who curtly inform him that his wife is suspected of being a Nazi spy. If their suspicions are proven, Max will have to despatch his lover “with his own hand” – as incomprehensible and wholly inefficient a plot device as you’re likely to see.

It’s at this stage that the lack of romantic sizzle and fizzy rapport between the two leads is most sorely felt. Screenwriter Steven Knight (Peaky Blinders, Locke) stretches to try to conjure up some Hitchcockian thrills, but that hinges on our being sold on Max and Marianne’a whirlwind romance. Without the emotional stakes of a marriage under duress, all that’s left is a succession of rote plot twists and an underwhelming big reveal that leaves you wondering if Pitt and Cotillard really think it was all worth the subsequent media storm.