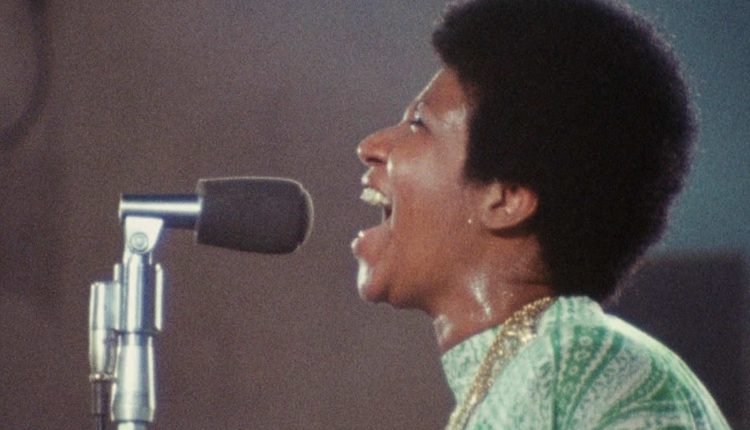 In 1971, the late Aretha Franklin recorded a special gospel album before a live audience in a Los Angeles church. The result, ‘Amazing Grace‘, became one of the biggest albums of her career.

However, these two recording sessions were also filmed by a camera crew led by late Academy Award-winning director Sydney Pollack. Due to technical difficulties and synchronising issues, the footage was never completed and ended up being shelved for more than 38 years. Before Pollack’s death in 2008, the recordings were acquired by producer Alan Elliot, and they are now finally being released as a documentary.

If you are expecting a level of showbiz and glamour, think again. Like the album, Amazing Grace is gospel stripped bare with Pollack’s grainy footage creating an improvised account of the sessions, leaving Franklin to inspire the patrons. Comprising churchgoers, fans and the supporting Southern California Community Choir, their collective reactions to Franklin’s voice, especially during the eponymous track, create a sense of unity among attending Caucasians and African-Americans. The film offers a rare treat of her behind the piano while having her brother and father in the church makes it more of a family affair.

In Amazing Grace, 29-year-old Franklin proves that she is more than the Queen of Soul. Driven by emotion and a personal spiritual connection that stems from childhood, she loses herself in the music as if it is a source of comfort. Her closed eyes highlight the fact that she isn’t playing to the camera and she’s not there to entertain – she is there to connect with God, and the beads of sweat she constantly exudes from the multiple spotlights aren’t going to stop her.

As a result, audiences just see her for what she does best and she does this to a tee. Soaring through each song, the raw, unrestrained power of her vocal performance creates a magnetism that is rare in the entertainment industry, and offers an experience that only comes once in a while.

Considering Franklin prevented the film from being shown at the 2015 Toronto and Telluride film festivals, we are left to wonder what the true motivation is behind the footage. It is a mystery that neither Franklin nor Pollack can answer. However, it is a tragedy that it took her death – 47 years after the recordings took place – to see a film celebrating her incredile talent.

With Ms Franklin at her prime, Amazing Grace is the most intimate concert audiences will ever see. All hail the Queen of Soul – and the Goddess of Gospel.

Amazing Grace is out in UK cinemas on 10 May.