Sai is a capuchin monkey. As the pet of a young girl, for a reason unbeknownst to us, he is tucked away in a cage with a cuddly toy monkey for company and transported by aeroplane across the country, and the Amazon rainforest. Sai doesn’t reach his destination though, instead he ends up in the rainforest, as the plane is forced to crash land and the pilots abandon him. All alone he must now fend for himself and figure out the mysteries of the incredible jungle. 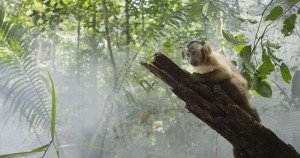 With no dialogue, Amazonia is a vivid and wonderful visual experience and really benefits from 3D. The worst part of the film is this opening obligatory scenario setter which is quickly forgiven once the film really gets going. What follows is a beautiful exploration of the variety of fascinating flora and fauna that occupy the rainforest. Our main protagonist encounters many beguiling creatures from a tapir with a curious proboscis to a hunting jaguar, and even has a trippy dream along the way. He must adapt to survive this often treacherous environment and soon discovers that becoming part of a tribe of capuchin monkeys may be his only hope for survival.

Sai has an incredibly expressive face which successfully conveys a wealth of emotions and combined with the multitude of noises he makes, say everything we need to know. The safe music also supplements the emotional state of each scene. The foley deserves credit for successfully giving each character a ‘voice’. The point of view of the monkey is thankfully never overtly used, instead the camera observes the beguiling creature. 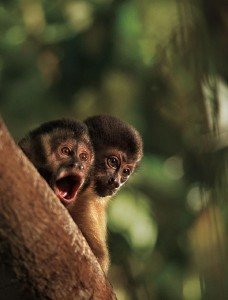 The loose narrative gives a focus to the film but really this is all about the beauty and awe of a magnificent and threatened landscape. Yes, there is a moral message behind this but thankfully filmmaker Thierry Ragobert chooses not to treat this as a polemic but rather incorporates a brief scene showing the predator at the top of the food chain: homosapiens. It is simple and effective.

As someone who has had the great pleasure of visiting the Amazon rainforest, I found the distinct noises of the oropendola birds and drifting shots of the majestic trees do truly capture the place and I found it quite emotional, almost feeling like I was back in this magical habitat. Close ups of the variety of insects, birds and reptiles are a treat to see on the big screen and whilst the narrative at the beginning and very end is fake feeling, it serves its purpose as a vehicle for depicting this outstanding wonder of the world. 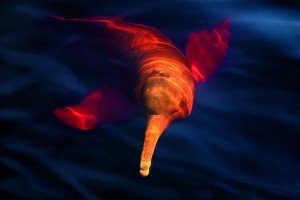 Taking over 2 years to make, I am extremely intrigued by the making of process, how they managed to get such spectacular animal footage and how the scenarios with the monkey and the animals were set up. Often it is the great illusion of film (shots of a jaguar and then a shot of our protagonist magically bringing the two into the same time and space) but there is certainly much more going on than this. Filmmaker Ragobert has worked on documentaries before and so these skills have certainly paid off.

Amazonia is a rewarding and mesmerising experience. Technically impressive, it should hopefully subtly make people think about this endangered environment. The simple story and cute protagonist should please children and the spectacular visuals should satisfy any adults with an interest in the natural world. This is no Attenborough documentary and it is not particularly educational but it simply informs us of the true beauty of a place few people will ever see in real life. The 3D really enhances this experience and allows the viewer to be transported to the incredible Amazonia.