Almost everything about two boys growing up, together, and then not: a document of 12 years

The parents of Idris (pronounced “EE-driss”) are Joe Brewster and Michèle Stephenson, middle-class African-Americans living in Brooklyn who are also filmmakers. He is also a psychiatrist educated at Harvard and Standford; she is a lawyer educated at McGill and Columbia. At one point, seeking in vain for work “for hire” that they could truly commit to, inspired by Michael Apted’s “Up” series, they decided to take up cameras themselves and shoot their own son and other children attending the prestigious Dalton School, in Manhattan, which had a commitment to maintaining a racially diverse student body. Eventually their subjects narrowed to their son and a friend. He was Olowaseun (Seun, pronounced “SHAY-un,” subsequently shortened to “Shay”), son of Stacey and Anthony Sommers, a nursing care manager and CBS systems engineer, respectively, also African-American, middle class, and Brooklyn residents, who probably met at S.U.N.Y. Binghamton, which they both attended.

As little boys both are charming. Idris is candid, articulate, and sweet. Seun is warm, a charmer. Idris is precocious in basketball at Dalton in middle school. But he hits a snag when he isn’t promoted to the varsity team. Though a great player and scorer, he is small. 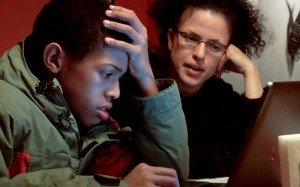 This documentary follows Idris and Seun over a period of 12 years, from kindergarten to the start of college, age 5 to 18 — though Seun was not promoted from Dalton Middle School to High School and instead transferred to Benjamin Banneker, in Brooklyn. It’s a rich saga, an intimate picture of the two young men, their academic struggles, and their parents’ efforts to make them do well. Idris and Seun are good friends till Seun leaves Dalton; then they don’t see each other very often. The “Directors Statement” offers interesting information that’s not in the film. It explains that Joe and Michèle became good friends of the Sommers, to the point that they sometimes had to put down the camera when around them so as not to jeopardize that friendship, trusting that the accumulation of material would make up for the moments lost. They also note the leap forward into HD digital cameras that made the technical side easier and the results better (some of the early footage looks crappy by comparison with later images). Funding also improved.

What is the “American Promise”? Equality, no doubt; the opportunity to achieve excellence whatever one’s background. And the film above all shows how hard it can be for a young black male to do well even in very promising circumstances. This film, like Apted’s films, lets its subjects do the talking, along with some others, notably their parents, also school administrators and teachers. There is a class at Dalton taught by a young black man discussing Ralph Ellison’s Invisible Man. We see Seun being tested for a promotion in karate. We see Idriss playing basketball at Dalton. We see him visit Stanford. He does not get in, but he wants to study in California, and decides to go to Occidental, in L.A. To some extent this is a story of dreams deferred, but it’s also a story of opportunity granted. Bu did Dalton really give Idris a head start, or was Seun more nurtured at the all-black school, Bannaker? 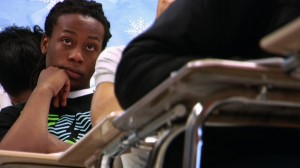 How many times do we see the parents tell Idris or Seun that they’re lazy? Joe and Michèle decided to present themselves with a degree of ruthless honesty, and their, and also Seun’s father’s, attitude toward their sons sometimes seems unfair. Michèle comes off as a kind of stage mother, always seeming worried that Indris won’t do as well as she would like. This reflects the mood of the America of this generation. The Dalton white kids’ parents are worried too, and pay out a fortune for extra tutoring the black parents can’t afford. But Dalton administrators say the black males have troubles the black girls don’t. And specific problems are found. Both boys have academic troubles at Dalton. Seun is found to be dyslexic; later Indris is diagnosed as having “attention deficit disorder” (ADD), and Idris starts taking the common medication for this, ritalin. The film shows Idris performing differently and showing symptoms of taking a stimulant; but whether his school performance improves isn’t really made clear.

Both boys seem bright. Idris particularly seems sophisticated and verbal as well as senstiive, perhaps socially less mature and secure in his own skin than “Shay.” Idris’s grades are average, apparently, making his goal of getting into Stanford unlikely. Why? Why don’t they both do better, despite their parents working overtime to help them? Why is Idris’s father, a psychiatrist, so often satisfied with the explanation that Idris is “lazy” and doesn’t “push” hard enough? 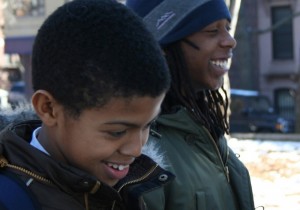 All this remains something of a mystery. But ultimately we need to see this film in terms of Apted’s “Up” series, an accumulation of almost an infinity of little personal day-to-day details over time about its subjects that reveal the tenor of their lives, with no need to give answers. And we can’t help hoping Joe and Michèle will provide us with pictures of Idris and “Shay” in the future, at intervals, to see what becomes of them. A life is a wonderful thing to watch unfold.

American Promise, 135 mins., debuted at Sundance, January 2013, and was screened for this review as part of the New York Film Festival at Lincoln Center, September 2013. There will also be a book planned for winter 2014 release, Promises Kept: How to Help Black Boys Succeed in School and in Life- Lessons Learned from the 12-Year American Promise Project. See the American Promise website for other information.

An interview with Melissa George