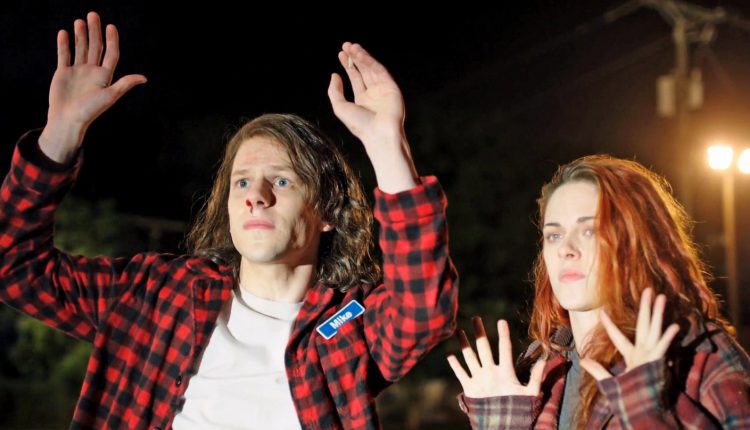 What American Ultra first has to recommend it is its stars, Kristen Stewart and Jesse Eisenberg, a combo both obvious and odd (they were together for Adventureland in 2009) — though this will eventually lead to disillusionment. The writer, Max Landis, shows a knack for playing with genre. He wrote the scenario for the novel young-man twist on a superpowers movie, Chronicle, directed by first-timer Josh Trank and with a first notable appearance by talented Dane Dehaan. This new venture may have seemed an amusing change and a lark for both Eisenberg and Stewart. They soldier through valiantly, but Ultra might conceivably have sparkled a bit more with unfamiliar, hungry new talent like Dehaan than it does with the seasoned Jesse and Kristen.

But let’s admit straight out that the director, British-Iranian Nima Nourizadeh, is a director whose name is already infamous, for he is the one responsible for the boorish non-stop party picture known as Project X, a movie only notable for its spectacular bad taste. Nourizadeh has no idea in the world how to keep things under control, and what might have worked as an offbeat comedy with romance that becomes berserk actioner (if such a thing could work) just winds up as an increasingly violent and unfunny mess. For one thing, Nouizadeh has no sense of pacing. With all the violence, American Ultra is full of moments when the action goes totally dead.

Max Landis was working on something similar here to the kids-with-accidental-superpowers theme of Chronicle that worked well with the aid of a more restrained and focused director. This time instead of college students, it’s a self-declared f—-up and loser. In the tradecraft sense, Mike Howell (Eisenberg) is a sleeper: that is, his superpowers are waiting to be awakened. He is the only success from a secret CIA program called “Wise Guy” administered by a woman called Victoria Lasseter (Connie Britton, who looks like somebody else, probably in a Bourne movie). Lassetir goes rogue on the Agency when she learns that Howell, her pride and joy, has been deemed too dangerous and will be terminated, which she can’t allow. Actually everybody at the CIA goes rogue, including Lasseter’s suddenly power-mad opponent Adrian Yates played with vigor by Topher Grace: never has the name “Langley” been taken so in vain. Explanation: it’s all, like, stuff spun out of maybe ideas for a graphic novel. There’s a buried clue: while putting in his slacker shifts at the local convenience store, Howell sketches sci-fi cartoon ideas. Are we being self-referential here? If so, the point is lost.

To do Landis credit, and even Nourizadeh, as well as the actors, there is some novelty in one thing — the gradual process (if a bit too gradual) when Howell, hitherto unaware that he can even go to the airport without having a panic attack, discovers his superpowers and begins using them to fend of the CIA operatives sent by Topher Grace, tidy and pleasant-looking as always but implausibly nasty as a desk jockey seduced by the lure of government-sanctioned mayhem. And there’s some interest in finding out what role Phoebe (Kristen Stewart’s character) is destined to play in this whole business. Only all this is dragged out too long till we don’t really care, while whether Howell finds the right moment to propose to her and give her an engagement ring becomes a tediously drawn-out and pointless theme.

It’s clear from Clouds of Sils Maria that Kristen Stewart was ready for lots more serious stuff than being the “Twilight” honey. Though so eternally boyish he seems hardly grown up since 2002’s Roger Dodger, no proof was needed that Eisenberg is a remarkably protean talent for one who nearly always looks like a skinny nerd, 32-going-on-16. He triumphs over the limitations of his physicality and his light, whiny, man-boy voice. He is seriously scary in the excellent Night Moves, unpleasantly brilliant in The Social Network, sharp and needy in the David Foster Wallace memoir The End of the Tour, ethnically immoral in Holy Rollers, and on and on. He can wear all these roles, and still that smart, sweet, mercurial Jewish boy is always inside. He has his touching moments as Howell. A CIA superpower mole is certainly a new hat (and wig) for him to wear, but his gameness to take on comedy (like Adventureland and Zombieland: question — which is which?) has never seemed to me as valuable as his ability to dive into challenging and serious roles. This is not one of those.

American Ultra goes wrong like David Gordon Green’s Pineapple Express, a funny stoner-slacker comedy (like this, initially) that becomes un-funnily violent in its concluding showdown. Trying to blow up a town in West Virginia just isn’t going to be funny. This movie is such a botch it even makes another movie of the weekend, the really imaginatively inferior Owen Wilson action vehicle No Escape, poor as it is, look relatively like a success. The Boston Globe’s Peter Keough puts it accurately: “No Escape is a tense but utterly predictable exercise in Western xenophobic paranoia and guilt.” And its shaky-cam images can really get on your nerves. But “exercise” means it does its job: keeps its xenophobic scared-white-person-in-Asia excitement ramped up and moves toward a timely resolution. American ultra doesn’t even seem to know when it’s over, despite the afterthought of its busy graphic-novel credits.

Steve Jobs: The Man in the Machine