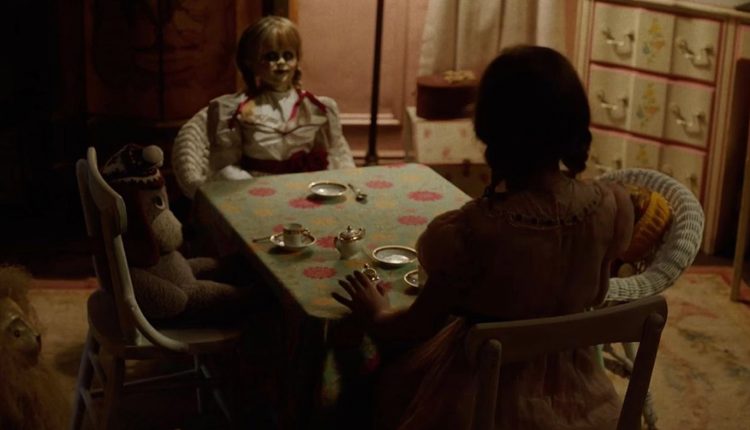 James Wan’s ever expanding Conjuring universe has delivered some pretty frightening scenes of terror over the past few years, taking the genre back to basics with its simplicity is effective enough in delivering its authenticity. Pairing what has got to be the creepiest looking doll alive – apart from Chucky – and children have to be the staples of a good horror that will plague nightmares.

The second spin-off within this universe being Annabelle: Creation, a period prequel to Annabelle and an origin story of where it all began intertwines what has come before with small acknowledgements that any fan of this world will instantly recognise has all the hallmarks of magnified sound echoing through the halls placing empathises on the creepy and invoking a quickening of the heartbeat before the horror appears before the eyes.

Set within an isolated landscape, Doll-maker Samuel Mullins (Anthony LaPaglia) and his wife (Miranda Otto) tragically lose their only daughter in a horrific accident but it isn’t until twelve years later, confined to their vast empty house, the couple open up their home as an orphanage to take in a small group of Children and Sister Charlotte (Stephanie Sigman). Finding both the house and its occupants strange, young sisters Janice (Talitha Bateman) and Linda (Lulu Wilson), as curious youngsters do, begin to explore their new territory, discovering the couple once had a young daughter themselves, leading the girls to discover her bedroom and setting free the almost child sized possessed doll to reign down its terror and reveal its true devilish identity.

Suffering from polio, Janice, accompanied by her walking stick and donning a brace on her leg which hinders her movement, is an outcast from the rest of the girls making it completely obvious this poor young thing will be the object of desire for the evil that lurks within, it’s clichéd moments come after her first night of exploring the house alone and discovering Annabelle locked away and creepy things start to rear, although scared, this doesn’t deter her from  re-entering the room she has been forbidden from entering to encounter all hell breaking loose.

Director David Sandberg has been given a free reign with this outing, being an origin story he has been allowed to break away from producing the same old movie the genre so often delivers in its sequels. Instead, we are given a story that simmers and gently bubbles for some time, prolonging the predestined fate and pushing the terror in short sharp bursts of gut wrenching pain and demonic crusades. Even our Annabelle doll, looking a little less tame than the original, has a tremendous amount of screen time as the camera focuses on that lifeless face itching every last detail into the depths of your memory.

Far from being the best in Wan’s terrifying universe, Annabelle: Creation ticks all the right boxes with its slow build and atmospheric tension that smacks you cold-blooded in the face, a devilish spectre of frightful fun lacking in any gratuitous gruesome endeavours.