The Anomaly stars Noel Clarke, who also directed the movie, as Ryan, a man who starts to lose large chunks of time. Each time he wakes up he’s days ahead from the last point in time that he remembers, and is also in a very different situation. There’s a young man (Ian Somerhalder) who appears to be ready to help him whenever things get too out of control, and who appears to know more about the situation than Ryan does. Of course, the fact that Ryan only seems to stay conscious for just under ten minutes at a time means that he has little chance to get his bearings and figure out what is happening.

Mixing a potentially interesting sci-fi premise with standard thriller elements and some action beats, The Anomaly overstretches itself slightly, but deserves kudos for not going down the well-worn paths that so many other British movies have taken.

Clarke is a competent director, and he’s also a good writer. Which is why it’s a shame that Simon Lewis wrote the script for this. I’m not dismissing Lewis completely, as the script isn’t terrible, but I can’t help thinking that the end result might have been better from Clarke, who already juggled timelines so effectively in the enjoyable 4.3.2.1.

At least the man does his usual good work in the lead role, giving a decent performance as the confused hero who can fight himself way out of a tough spot. Somerhalder also does well onscreen, and I got to wondering once again why he hasn’t had a bigger career by now. Brian Cox appears for one or two scenes, although some of his moments are unintentionally amusing, Luke Hemsworth pops up to remind us all that the Hemsworths look set to become the Australian Baldwins (he’s okay, by the way), and Alexis Knapp is a pretty prostitute with a tragic past who ends up helping our hero. Niall Greig Fulton also turns up to play a scientist capable of creating a virus that Ryan realises he must never allow to infect the population. 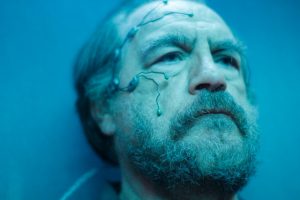 There’s a lot of nice visual design work on display, and the near-future is well-realised, considering the relatively small budget that I assume the movie had. It’s just a shame that the same level of care wasn’t taken with the fight sequences, which feel like a poor attempt to emulate superior sci-fi action fare, or the cast of characters. With the exception of Ryan, none of the main characters made enough of an impression for me to really care about the outcome.

Certainly worth a look if you like slick, shallow sci-fi, The Anomaly is a film that I hope does well enough to allow Clarke to keep doing what he loves to do. I just can’t enthusiastically recommend it, nor will I ever set out to rewatch it.

Can you recognise a famous film by looking at it on a map?