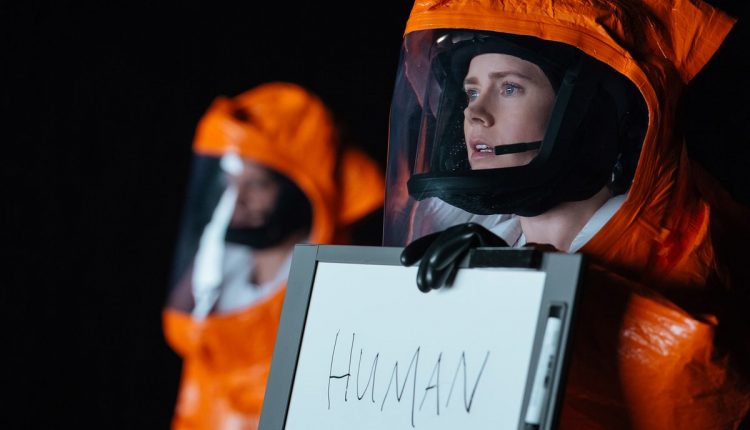 Britain might have fallen out of love with experts, as Michael Gove so eloquently explained this year, but for Hollywood they’ve lost none of their shine. When bad things happen it’s straight off to academia to find someone to fix it. Arrival takes this approach, wisely turning to a language specialist in an attempt to make first contact with aliens, rather than a Nigel Farage type figure who would help to gather up the pitchforks before retiring just in time to avoid the important work.

Arrival, a film aggressively determined to avoid coming across as dumb, is the kind of project it’s heartening to see in Hollywood. Canadian director Denis Villeneuve (riding a hot streak of late following Sicario and Prisoners) takes the helm as 12 silver cylinders descend from the heavens and park up around the world. This provokes a lot of questions, chief amongst them a fervent desire to know what the aliens want. They don’t seem initially violent, and are willing to let humans aboard where they stare at the strange multi-limbed creatures from the other side of protective glass. Talking to them is a different matter.

Step forward Dr. Louise Banks (Amy Adams), a miscellaneous language expert who once helped the military kill a few insurgents. Despite this, barbed comments she makes to Forest Whitaker’s Colonel Weber suggest she’s no patriotic military shill. They want her anyway, swooping down in a helicopter to pluck Dr. Banks from her lonely waterfront house. She’s whisked off to Montana with Jeremy Renner’s theoretical physicist where the two of them are put in charge of bridging the communication divide.

It might not sound exciting, but watching Adams and her team inch closer towards understanding is remarkably fulfilling. Villeneuve taps into the possibilities that open with alien interaction, capturing the unprecedented scale of the event amidst the detail of language recognition. It doesn’t hurt that he’s made a truly beautiful film. Most of the imagery is stark and simple, giant objects set against small. One astonishing shot sees the team ascend into the alien ship, the screen black aside from a rectangle of light in the middle.

Moments like these establish the world-altering nature of events, but Arrival doesn’t have to rely on gargantuan spaceships towering in the distance to achieve this trick. Crowds gathering around a TV screen or a succession of phones beeping as news breaks prove equally effective. News stories filtering through from the other 11 sites help ratchet up the tension as the citizens of earth first work together and then pull apart.

For all the wonder provoked, a trite undercurrent begins to pick up speed. Adams, dependable as ever, doesn’t just have to play the determined expert. She’s also a mother, plunged into memories she’d rather forget. This unnecessary need to tie momentous world-changing events to a personal story of motherhood comes with an unpleasant aftertaste, as if we can only empathise with her when in the latter role.

It doesn’t help that the emotional moments are poorly written. Hammy dialogue intrudes, particularly in the second half when a ‘we’re all one people’ vibe takes over. Delivered with solemn strings and serious faces, there’s an attempt to reach for a level of profundity that simply isn’t on show. In some ways it’s like Interstellar – visually a masterpiece, emotionally a mess – although the visuals aren’t as good as Christopher Nolan’s film and the emoting isn’t as bad.

Arrival, for all is flaws, is still bold, exciting filmmaking. It’s a good film. The frustration comes in knowing it could have been so much better.