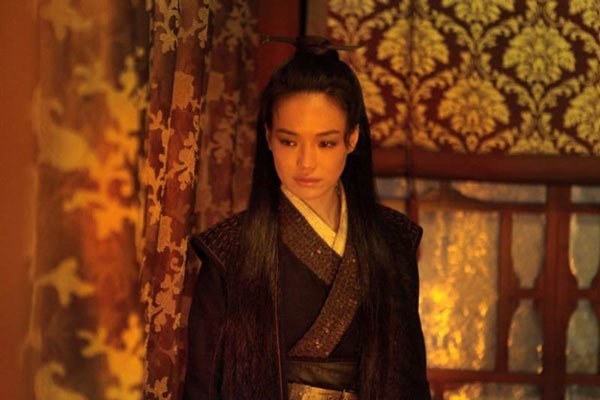 I’ve experienced a lot of different things in the cinema, but the onset of agoraphobia is a new one. So deliciously rich are the interiors in Hou Hsiao-Hsien’s long-awaited foray into wuxia, the moment The Assassin ventured outside I was left bewildered and uneasy in the natural light. Not that his exteriors aren’t exquisite either; they just can’t compete. It’s like comparing the best quality organic fruit with a magic apple. The decks are stacked before the game even starts. Everything is so hypnotically gorgeous it barely matters that the plot is borderline impenetrable, and the actual martial arts practically non-existent. If anything, it makes it better.

There is a story going on across the frames. The assassin of the title is Nie Yinniang (Shu Qi), daughter of a prestigious military leader who was captured as a child and trained into the deadliest killer in dynastic China circa 9th century. After failing a mission due to moral compunction, she’s sent back to her homeland and instructed to kill the man she once loved. Her impending decision lies at the heart of the narrative; obey her calling or obey a long since broken heart.

Narrative most assuredly does not lie at the heart of The Assassin. Hou is content most of the time to show dense interiors full of glowing colour and rich texture. His camera slides gently side to side, up and down, watching the action. Or lack of it. Characters sit in silence, quietly bathe, sometimes talk but rarely rush. The camera watches it all; straight on, from the side, through thin curtains. No scene is ever rushed. An ocean of time exists to take in every tiny detail of the perfect production design, every inch of every shot of the cinematography.

Ostensibly this is a wuxia film, and dutiful fights occasionally break out. The key words are Hou Hsiao-Hsien, not wuxia though. Anyone turning up expecting a good old fashioned martial arts scrap will walk away disappointed. Even when Yinniang sets about dispatching all and any obstacles, Hou seems more interested in background detail. He gives up on one fight almost immediately, pulling the camera back across a small lake to watch from a distance. In a one-on-one battle near the end, he cuts Yinniang out completely, focussing on a prone body instead.

It’s not that the fighting is irrelevant, or that the plot has no real importance. It does. Hou is touting a clear anti-war message that would make glamourising violence antithetical to his film. When Yinniang explains that the execution of one mission will only lead to pointless escalation, she’s shouted down. Dressed all in black with peerless skills, she’s meant to the be the sharp edge of the blade. Orders are to be obeyed, never questioned. If violence is asked for, consequences be damned. Arguing against is heretical.

Hou’s way of delivering the message is unconventional, however typical it is of his career as a whole. Everything is subservient to the image. This is visual poetry pouring down until everything’s submerged. The Assassin is a slow, graceful journey that rewards patience. The cinematic equivalent of meditation, I came out a calmer, happier person as a result. Once I shook off the agoraphobia.