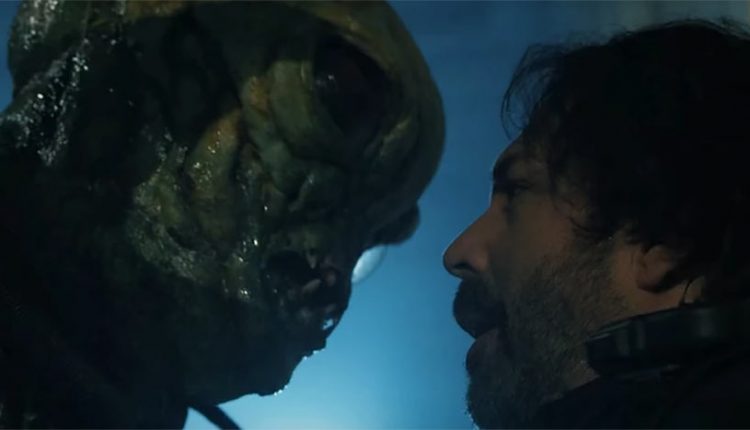 B-movies are not known for keeping it simple and the unknown is an apt description of Brandon Slagle’s crime/sci-fi/dystopian action thriller. Beginning in a SWAT team van, we have our protagonists labelled out to us as this unit of law enforcement. They’re there to cause a drug bust and take down Hades (Robert LaSardo) – an opening that seems similar to many low-budget crime films. The usual tropes are there and in obvious fashion – a mixture of offensive stereotypes and a long shootout scene of guns that feels like a first-year film school project.

The editing is fast and able to hide what its budget could not. Although it sometimes is jarring, it is enough to make up for the lack of production value and provides a sense of tension that we cannot get elsewhere. As well as our antagonists, we have the usual suspect in a reluctant alcoholic cop who’s on his last legs in Vernon (Richard Grieco). Grieco is a talented actor and although his role isn’t particularly challenging, his experience is enough to make up for the other z-listers who fill the supporting cast. Although it’s hard to point fingers at a specific point, cheesy quips can not be saved from poor line delivery.

Unbeknownst to this team however is a terrestrial presence that is ready to bust this case wide open. A catastrophic alien invasion affects the whole team and now they have to prioritise themselves and humanity blurring the lines between law and crime. Although we see little of the world except these few locations in LA, Attack of the Unknown is able to world-build effectively which is a must for any sci-fi film like this. The environment is believable in its stakes but is then questioned when various VFX likes sparks flying and not affecting a character’s hand. The larger effects of the invasion like the UFOs and explosions are as good as they can be for its budget but still leaves questions overall. Especially that the aliens in question have come straight out of a 50s B Movie that you’d find on the TCM channel late at night. It’s an aesthetic that is unlike any other and it’s bizarre that it didn’t run away with this idea and own it as well as they could have. Being set in the modern era, with an over-exposed digital look, these aliens feel like a budgetary issue rather than a personal choice. When we’ve seen shoot outs including grenades and machine guns, it makes these slow costumed beings feel like an unalarming threat.

It’s hard to imagine Attack of the Unknown wanting to be the next best doomsday film, but in order to make this a thrilling and enjoyable ride, it needed to give more style and provide something a little unique in its substance.