Directed by John Wells, and based on a play by Tracy Letts (who also wrote the screenplay for this adaptation), August: Osage County is a showcase for actors, and don’t some of them like to remind you of that fact. There’s some good stuff on display here, and I sometimes enjoy some great showboating, if the material allows for it, but some viewers may find themselves rolling their eyes as the whole thing becomes more overwrought and, in some ways, a competition for who can show their turbulent emotions in the most visible manner (hint: it’s a tie between Julia Roberts and Meryl Streep).

Streep plays Violet Weston, a rather horrible woman who ends up gathering her family around her when a death puts them all into a state of shock. She has her sister, Mattie Fae Aiken (Margo Martindale), her three daughters (played by Roberts, Julianne Nicholson and Juliette Lewis), and their various partners. Oh, and there’s her granddaughter, Jean (Abigail Breslin), and her nephew, George (Benedict Cumberbatch). There’s also a paid carer in the house (Johnna, played by Misty Upham).

I recently saw a Hammer movie entitled The Anniversary, and I had this to say about it: “This kind of material has been done before – family politics, scathing insults delivered with a smile, psychological issues simmering beneath every exchange – and it has been done much better.” I mention that specific phrase here because while August: Osage County is far from a perfect movie, it is one of those movies that covers the same ground as The Anniversary, but does everything much better.

Wells directs competently enough, and there are just enough moments opening up the environment slightly to help viewers forget that this is based on a stage play. Letts has done a fine job with the writing, as he has on numerous other occasions (check out both Bug and Killer Joe for some other fine examples of his work), and he consistently manages to reel things back in, just when you suspect that it might all topple over into an abyss of complete despair. 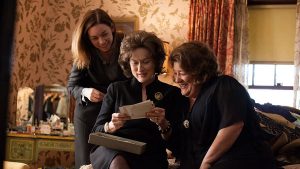 Streep is very good in the main role, but there are still plenty of moments in which she reminds viewers that she is Streep ACTING. Roberts tries to up her game to match Streep, and ends up giving a performance that veers between decent and pretty awful. Her character, more so than anyone else onscreen, requires a more subtle, shaded, interesting performance that she’s unable to provide. Thankfully, Nicholson and Martindale make up for the two main performances, and Chris Cooper (playing the husband of Martindale’s character) effortlessly steals almost every scene that he’s in. Lewis, and Dermot Mulroney as her flash boyfriend, help to lighten the mood during most of their onscreen moments. Cumberbatch gets to play a very sweet character, and does okay with the accent (I guess), and Ewan McGregor does his best with, arguably, the most superfluous character in the mix. Breslin and Upham don’t have that much screentime, but both do well enough, with the latter being particularly memorable in a role that leaves her seemingly on the very perimeter of the main events.

There’s a lot to enjoy here, including most of the acting, but Streep and Roberts drag things down slightly. However, it is a great piece for all of the actors involved, so anyone failing while trying a bit too hard is not the worst cinematic crime, in my opinion.