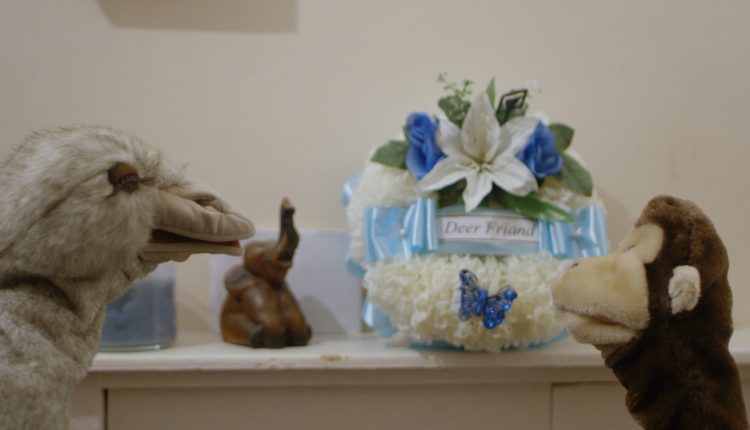 You’re unsure what to expect in the first few seconds of Autumn Never Dies when we meet a set of gloom faces attending a funeral. But of all the things that could happen next, a hand-puppet monkey sitting in the front preparing to say a few words was the least of my expectations. Voiced by the director himself (Chris Quick), Nelson the Monkey later tells his friend Danny the Ostrich (Duncan Airlie James) of the good turnout for their late friend Jimmy Guinness. From there on we stay with these two working class puppets as they go about their daily lives in Scotland.

Some people may recognise Nelson and Danny from the first short ‘The Greyness of Autumn’ which was released in 2012. However with the tagline of Autumn Never Dies being “the sequel to the film you probably didn’t see”, I don’t think the producers are expecting much. However you don’t need to watch the first film to know what’s going on its simple, this is what Sesame Street would be like if it was set in Scotland. Puppets bringing in two pints for a fiver at their local pub never seemed to be covered by Elmo or Big Bird. But it is the usual affair for most films set in Scotland though and concept of it being around puppets gives a unique quality to it. It also helps a lot of the humour that can be hit-and-miss at times.

The humour is all around the timing and the dialogue itself by these two main characters. Certain lines like “I have never been kicked out of this pub sober” show the quick-wittedness of writers Chris Quick and Andy S. McEwan. Whereas on the other hand, a speed dating scene is lacking the comical aspect that it’s trying to deliver, only through a lack of editing rhythm that gets cut short with each reaction shot.

However the inventiveness and originality is still here. A scene involving Danny and his new partner Lizzie (Nicolette McKeown) having sex for the first time is something quite truly horrifying in the best way possible. It doesn’t need to be explicit but knows that only showing the shadows of these two, the audience can picture the rest. This adult silhouetted scene is not the only moment of bizarre stylistic choice, even the opening credits are in homage to the famous Bond opening sequences with its music and graphics. You may be asking, does this all work within a 25 minute short? Yes and no. But the concept is so great on its own that I want to see more from these characters and the type of everyday problems they get into. This is definitely a show I could see Channel 4 or Adultswim developing and I hope that a third film in this franchise is just around the corner.

Snowpiercer finally arrives on Blu Ray & DVD in the UK