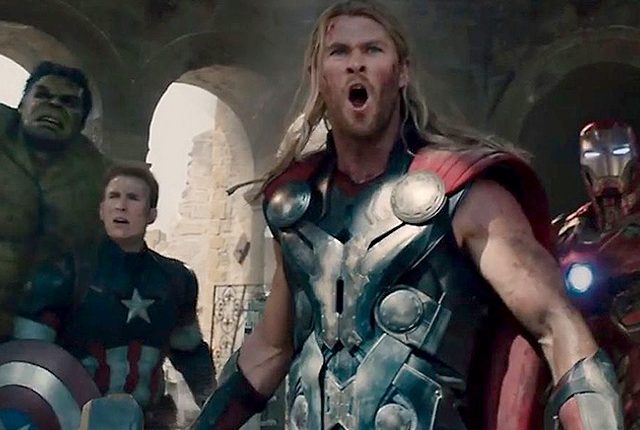 Four years ago, geek ‘hero’ Joss Whedon directed and wrote Marvel Avengers Assemble, the culmination of various stand-alone films and a feature that caused much anticipation among comic-book fans, old and new, around the world. His efforts gained critical and financial success, becoming the first Marvel film to gain more than $1bn at the box office. Now, the gang gets together to not only mark the end of Phase Two, but also welcome new additions to Phase Three of Marvel’s Cinematic Universe.

Avengers: Age of Ultron sees the eponymous heroes recover the sceptre used by Loki in the first film from terrorist organisation Hydra. Before Thor (Chris Hemsworth) takes it back to Asgaard, Tony Stark (Robert Downey Jr) secretly uses it to adapt a form of artificial intelligence for his Ultron project, aimed to develop a worldwide peacekeeping programme. However, Ultron (voiced by James Spader) becomes sentinent and decides to destroy the human race. So, the Avengers team up once more, while facing off against two new enemies: gifted twins Pietro ‘Quicksilver’ (Aaron Taylor-Johnson) and Wanda ‘Scarlett Witch’ Maximoff (Elizabeth Olsen).

It is fair to say that the heroes have gone through a lot both collectively and individually since The Battle of New York, yet there is a feeling that their respective chapters are drawing to a close. Throughout the film, the characters are either looking to the next stage of their lives or for ways to get out of their current ones, and with new heroes coming into the limelight, there is a poignant undertone throughout Phase 2’s final film.

Whedon incorporates the idea of breaking up everything from the inside and this is reflected in the balance shift within the team. Each of the Avengers are exposed to their own hidden fears and broken pasts and the lingering distrust from Avengers Assemble is revisited, while highlighting every character’s own flaws, ambitions and morals – all of which do not necessarily mesh well. This shows that regardless of their experiences and collective common goal, they are still not yet united.

However, there is enough charm and wit in this sequel that makes it easily superior to its predecessor. The memorable scenes are amusingly Whedonesque and the story is balanced enough to show that comic book heroes are not all about the brawn, but the heart as well.

In terms of casting, the starring cast members keep up the camaraderie that makes their collective on-screen presence so special. This applies in not only the high-octane action sequences, but also those where it is just them – no weapons included. While Bruce ‘Hulk’ Banner (Mark Ruffalo) and Clint ‘Hawkeye’ Barton (Jeremy Renner) get more of a role, while Natasha ‘Black Widow’ Romanova (Scarlett Johansson) is practically demoted to supporting cast, as her character represents the emotive side to the Avengers but not much else. However, the praise deservedly goes to the new additions – Johnson and Olsen keep up with the team, Paul Bettany is endearing as Vision and Spader’s taunting voice is fitting as Ultron.

Overall, Avengers: Age of Ultron is a fitting sequel – funny, action-packed and a lot more balanced. The Russo Brothers will need to deliver in 2019.

Avengers: Age of Ultron is out in UK cinemas on Thursday 23rd April.