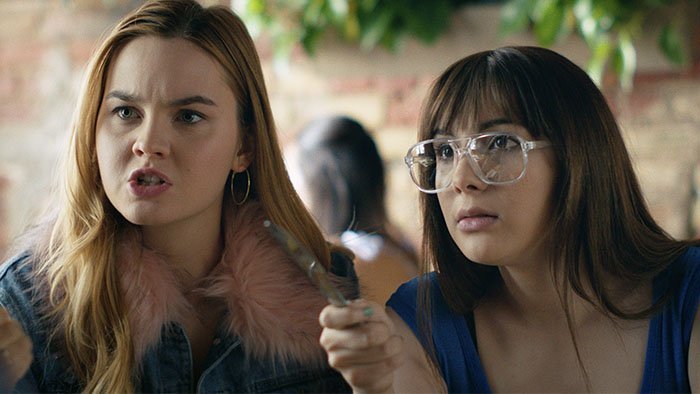 Independent teen girl-bonding films have certainly come a long way in terms of its mature outlook and the aspects of a foundational relationship that conveys such noted bonds of affection. Throughout the last couple of years or so serious observational cinema such as indie filmmaker Nick Richey’s effective Low Low or comical and edgy fare such as the underrated Augustine Frizzell’s twisted gem Never Goin’ Back or the rightfully critically heralded Olivia Wilde-directed Booksmart have delved into the raunchy psyche of experimental young womanhood and all its adversarial obstacles from complicated love to peer pressure socializing and the gravity of these very expectations.

In director Benjamin Kasulke’s unconventionally perceptive and engaging coming-of-age female friendship/romancer Banana Split we are treated to a familiar but surprisingly charming showcase of misplaced affection finding its desired target in a couple of high school girls willing to get over the heartache of a perceived dream guy. There is nothing remotely concrete or calculating about Kasulke’s youth-oriented feminine fable beyond the film’s willingness to invest in the plucky interests of its protagonist pairing of devoted galpals. Uniquely high-spirited, infectiously fun and genuinely received, Banana Split is fabulously uplifting in its own distinctive way.

Co-screenwriters Hannah Marks (as one of the film’s spunky leads) and Joey Power (“After Everything”) serve up an enjoyably padded story involving high school senior outcast April (Marks) and her two-year romance with aimless pretty boy Nick (former Disney Channel product Dylan Sprouse). Nick is a typical young guy with revolving likes and dislikes. Unfortunately, April and Nick are no longer an item. Sadly, the brunette April is exchanged for the blonde Ciara (Liana Liberato) that seems to have her act together. Now that Ciara’s heart belongs to Nick where does this leave poor April at this point?

The green monster known as jealousy rears its ugly head within the resentful April. How can Nick just move on and find such lovable bliss with Ciara? The desperate April enlists Ben (Luke Spencer Roberts) to help keep track of Nick’s and Ciara’s dating agenda. Conveniently, Ben is the middle man because he is both Nick’s cousin and April’s trusted best buddy. When the final summer party is held for the students’ benefit April receives a tip that Nick and Ciara will be there in attendance. Of course, April is thrilled and cannot wait to ruin whatever good time her ex-boyfriend and his new main squeeze have planned at the function.

As April attempts her confrontation with Ciara, things become rather cloudy and confusing. The intent is to mess up Ciara and destroy her credibility. Instead, the girls unwittingly become close and find each other so refreshing and trusting. Thus, a new friendship is born and now April and Ciara are inseparable. Best friends for life…but only under the stipulation that Nick not know what has developed between the girls.

Kasulke, in his directorial debut, has a breezy feel for the free-wheeling material that effortlessly is saturated in feel-good flourishes of connectivity between the two young women. Indeed, Banana Split may not necessarily gravitate from its conveyor belt of female attachment sentimentality but there is still something so rewarding about the organic build-up of consideration and coziness between Marks’ April and Liberato’s Ciara. Inherently touching and liberating, Banana Split is an endearing account of cemented youthful female relations not often demonstrated with such insight and inspiration.