Edinburgh International is a harsh mistress sometimes. One minute you are knee deep in a cannibal genre picture and the next you find yourself in a Gaelic soap – opera on the island of Skye. Bannan was my wildcard this year, the first Gaelic language drama released through BBC Alba, with involvement from Inbetweeners producer Chris Young and Creative Scotland.

Screened in three episodes, the narrative follows the journey of successful city lawyer Mairi (Debbie Mackay) returning to the island she grew up in after 8 years with the intention of attending a funeral. Yet what is planned as a couple of days turns into a several weeks due to the ‘bannan’ – the familial and emotional ties that connect her to her birthplace. As Mairi re – navigates the tight knit community again, she is forced to confront old demons including her relationship with her father, old – flames and petty rivals still stuck in a suspicious ‘island mentality’. 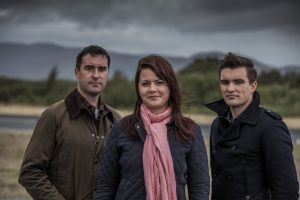 While Debbie Mackay’s performance as Mairi is both fiery and nuanced, Bannan was a television series that was a little too melodramatic, with criminality and police chases bearing the same exciting dynamics of the Postman Pat opening titles. However it was interesting to see a film using traditional Gaelic dialogue, which combined with the running thread of folk music, dance and beautiful scenery made the general aesthetic enjoyably escapist (in a Skye tourism board kind of way). Taking advantage of the success of non – English language dramas like The Killing, BBC Alba apparently hope that Bannan will also have international appeal and as a series combining British familiarity and historical exoticism in tackling the lives of 21st century Gaelic people, it is understandable to see how this would appeal to certain audiences but global appeal? I’m a little skeptical.

While it’s hard to deny that Bannan is a warm, empathetic look at island communities, it was a little too sparse for my tastes, containing many characters who I absolutely detested spending time with. As another indicator of the variety of Edinburgh Film Festival, Bannan was a relatively different viewing experience and even with the brilliant acting Peggy Wood and Mairi Mackay, failed to really spark my interests. I strongly feel that the film could be vastly improved with more Christopher Lee, animal masks and a large wicker effigies. Just saying …