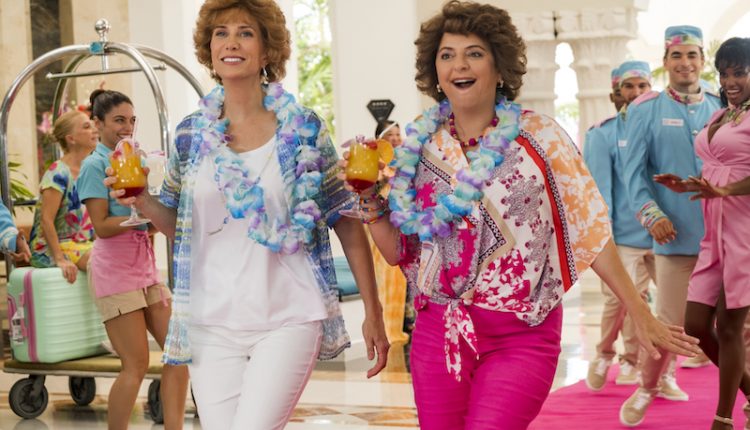 In 2006, comediennes Kristen Wiig and Annie Mumolo started to work on a female-led comedy called Bridesmaids. Starring the former, the 2011 film landed the duo with BAFTA and Academy nominations for Best Original Screenplay. Ten years later, the pair are back with their latest collaboration.

Directed by Josh Greenbaum, Barb and Star Go to Vista Del Mar not only stars Mumolo and Wiig, but they also have screenwriter and co-producer credits. The film follows middle-aged BFFs Star (Wiig) and Barb (Mumolo), who suddenly become unemployed. With no commitments tying them down, they leave their small Nebraska town for the first time ever for a holiday in Vista del Mar, Florida. However, the incredibly pale villain Sharon (also played by Wiig) plans to destroy the town due to a cannon-related incident, with the help of her besotted employee Edgar (Jamie Dornan).

When Barb and Star Go to Vista Del Mar first opens, the first few minutes have a Austin-Powers vibe to it. We have our offbeat villain in Sharon, the parodied subordinates, and the typical grandiose plans for mass annihilation. These shape the film to become another spy comedy but the assumption quickly shatters as soon as Shania Twain’s Man, I Feel Like a Woman kicks in.

Ultimately, this buddy-comedy focuses on Barb and Star’s seemingly perfect friendship – from their overlapping conversations and ability to talk about anything, they are two peas in a pod. With such similarities causing them on the verge of unbearable, they need a go-between. In this instance, it comes in the form of Edgar, who they meet drowning his sorrows at the hotel bar. After some techno Celine Dion and huge fishbowl cocktails, a night of drunkenness results in an inevitably awkward morning after between the three characters. While the women rediscover their sexuality, Edgar realises that his mission has been compromised, which not only tests his newfound connection with Barb and Star but also his (unreciprocated) feelings towards Sharon.

With Barb and Star having different expectations of their holiday, they are predictably unwilling to hurt each other’s feelings and the ‘three’s a crowd’ dynamic with Edgar creates an inevitable web of deceit and awkwardness with each lie becoming increasingly incredulous, resulting in some lacklustre dialogue. By this point, the inconsistency and somewhat laziness in the screenplay and plot begin to kick in amid Barb’s newfound adventurousness, which almost undermines not only her own personal journey but also the film’s cameos and supporting characters such as Darlie Bunkie (Damon Wayans, Jr.) and Yoyo (Reyn Doi).

Despite these issues, Barb and Star Go to Vista Del Mar is essentially a guilty pleasure – its lack of logic is compensated by its feeling of fun and entertainment, which are instilled by Barb and Star’s infectious enthusiasm amid the bright production design. The candy-coloured settings provide a fitting platform for the film’s bold song and dance routines, which deliver another layer of comedy and fantasy. With so many elements to juggle, Barb and Star Go to Vista Del Mar feels like an ambitious project for a first-time director such as Greenbaum. Therefore, he allows Wiig and Mumolo to drive the film through their on-screen chemistry, fast-paced chit-chat and a never-ending collection of culottes. They also share a great camaraderie with Dornan, whose amusing performance is a far cry from his previous, more dramatic roles. He also has one of the most memorable scenes in the film, which needs to be seen to be believed.