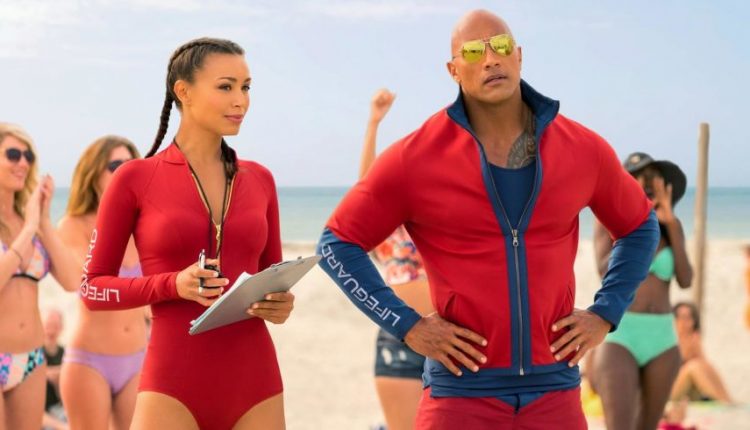 There was hope Baywatch would be another meta-infused, smart-yet-silly TV show remake in the mould of the Jump Street movies. Sadly, this hackneyed reboot doesn’t even come close to matching the admittedly high bar set by Phil Lord and Christopher Miller. Instead, it takes everything beloved about one of the 90s’ cheesiest guilty pleasures – the stunning beach vistas, mild peril and, yes, bouncing boobs – and drowns them in a tidal wave of confused plotting, clunky one-liners and clanging stupidity.

One-man charisma machine Dwayne Johnson is our David Hasselhoff surrogate, playing overzealous guardian of the sands Mitch Buchannon, who leads a crack team of impossibly attractive lifeguards tasked with saving lives on what has to be the most dangerous stretch of beach in the world. Needing to repair the division’s public image in order to secure extra funding, Mitch is forced to recruit obnoxious Olympian Matt Brody (Zac Efron), a disgraced pro-swimmer whose party boy antics earned him the nickname The Vomit Comet (and, yes, he does throw up in this movie. Twice.). Together with the rest of Mitch’s team, who appear so infrequently they’re barely worth a mention, they attempt to take down a nefarious drug dealer who’s responsible for a number of dead bodies that keep washing up on shore.

The movie is at it’s best when it’s sending up the inherently ridiculous concept of lycra-clad lifeguards fighting crime. A slick opening rescue mission, which ends with Johnson’s Mitch striding out of the ocean, a prone wind-surfer in his arms, as the title splashes down behind him in giant, gaudy letters is the standout sequence; but there’s also some decent gags aimed at the TV show’s signature use of slow-mo and a clever repurposing of actual plotlines for some of the team’s previous investigations. Disappointingly, such zingers are few and far between as the filmmakers seem to be torn between making a whip-smart spoof of the TV show or a more straightforward comedy about the importance of teamwork. It ends up doing neither particularly well.

Without a clear focus, screenwriters Damian Shannon and Mark Swift resort to relying on weak put-downs (“Bath time, shit head.”), boner gags, and occasional attempts at edginess which actually come across as tasteless missteps (“You’re like the Stephen Hawking of swimming, without the paralysis part.”). Don’t expect the story to offer much respite, though. The half-baked plot, which sees Priyanka Chopra’s sultry villainess scheming to privatise the beach so that she can sell drugs in the place she’s already selling drugs, is the kind of sub-CSI gubbins that would barely fill an episode of the TV series, and so inevitably feels overstretched for a two-hour movie. Add to that a bunch of peril-free set-pieces, not-so-surprise cameos from Hasselhoff and Pamela Anderson (they’re right there in the opening titles) and obvious plot twists with all-too-easy resolutions, and you’ve got a movie flapping helplessly in the water, without even a lifesaver to cling on to.

Scene Stealer: A thousand dancing feet from ‘The Lullaby of Broadway’, Gold Diggers of 1935