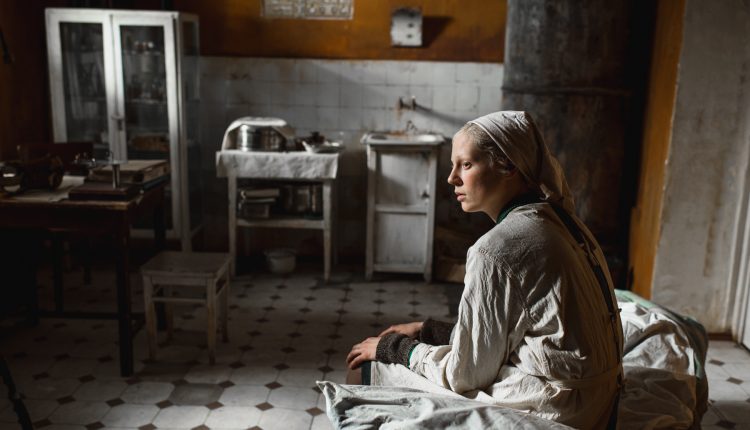 In 1943, Paramount Pictures release So Proudly We Hail!, an American war film that follows the Angels of Bataan, a group of nurses sent to the Philippines during the early days of WWII. In one scene, Japanese soldiers are advancing onto their unit, everyone is urged to flee but one nurse stays behind. She walks towards the Japanese, grenade in hand, and pulls the pin. Her fellow nurses watch in horror. Films about women in combat, the brutality they endured and its emotional toll on them, are rare. The heroes of war, those who sacrificed themselves for freedom, and those we give remembrance to, often only have a male face. There’s a female face to war, one that So Proudly We Hail! shows in combat, and one that Beanpole shows in war’s aftermath. At just 28-years-old, Russian director Kantemir Balagov has established himself as one of the year’s best directors. Inspired by Svetlana Alexievich’s The Unwomanly Face of War: An Oral History of Women in World War II, the Cannes award winner, Beanpole, marks only the second feature film for the director, and the first for its equally talented cast.

It’s 1945, the first autumn after the war, in a broken Leningrad. While the war is over, the city and its people have yet to find peace. “I’m not a person anymore,” one soldier says. It’s a city and a population torn in another war, one of physical and mental cruelty, as life and death continue their battle. Food is scarce and the poor live in communes. Leningrad’s streets are bustling with women, who now have the city’s survival on their shoulders as their men lay in hospital. Those soldiers have lost limbs, they’re paralyzed, and some won’t survive. While it may not mean death, everyone has lost their lives in some way, and Beanpole shows the desperate lengths people will go through to get back any kind of peace and normality. There’s a tug and pull of both hope and hopelessness for the film’s protagonists, Iya and Masha, two friends trying to rebuild their lives and overcome their trauma. Everyone surrounded by death is certain to have some kind of PTSD. If you google “PTSD” and “soldier,” though, the images seen are primarily of men. While Balagov’s film does strike a balance between giving male soldiers their due, as both Iya and Masha work in a hospital, his main focus is on female trauma.

Shortness of breath and a croak of a voice unable to speak. Those are the first sounds heard in Beanpole, symptoms of Iya’s PTSD condition. Played by Viktoria Miroshnichenko, she’s Debicki-esque in height, incredibly pale and sickly. Without warning, she will lose all control of her body, a stare frozen in place just as her body is. This PTSD is no doubt caused by her time as an anti-aircraft gunner. Her friend, Masha, played by Vasilisa Perelygina, served alongside her. Her PTSD takes a different form: she gets nose bleeds, which are accompanied by dizzy spells. But the root cause of her affliction has nothing to do with violence on the battlefield. She’s had many abortions, and because of that, she can no longer bear children. The differences in the cause of their PTSD is more important than Balagov may himself realize, as recent studies show that, for women, the loss of a fetus can carry the same psychological scarring as witnessing violence.

These are two incredibly broken individuals that create a unique and complication female friend you don’t often get to see on screen. This shared trauma locks them in a folie à deux, a dance for control and dominance. Perelygina’s intense, almost murderess stare, reminds me of characters in lesbian vampire movies. A Daughters of Darkness type relationship of both toxicity and tenderness, but one rooted in a bond of shared experience – one of blood. They have both witnessed death and loss together, and are both desperate to forget it. They want to heal, but their mental illness creates some heartbreaking and life-altering effects on themselves and each other. Theirs is a relationship that’s intriguing in its dysfunctionality and at times difficult to watch. But going back to the lesbian vampire movies comparison, there’s a queer subtext here (which, may I say, is brave and amazing to find in a Russian picture). In an act of dominance, Iya kisses Masha, and Masha kisses her back, perhaps suggesting repression of their sexual desires due to either circumstance or the now-archaic belief that only marriage to a man and motherhood makes a woman whole. Luckily, Balagov ends Beanpole on a hopeful note of possibility.

The film’s title not only refers to the affectionate nickname given to Iya by Masha (no doubt because of her height), but the word “beanpole” in Russian refers to clumsiness. “Everyone in the film is a beanpole,” Balagov explains. “They feel clumsy, they speak clumsily, they’re kind of just lost in the space of their lives following the war.” You can see this “lost in space” look in the eyes of everyone in Leningrad, as the camera tightly frames its subjects. This is one of the most affecting technical elements of the film as it carries the weight of war with it. You can hear every struggling breath. It’s not all bleak, though – the film’s use of colour gives it richness. The main colour palette of the film is red and green; fresh green paint drips onto a red wall, the clothing of its leads carry various shades of those two hues, and the sets, too, contain a contrast of both colours. The meaning behind those two colours is evident: red symbolizes blood, decay, loss, while green symbolizes growth, life, and birth. “Green represents the possibility of birth, the ability to bring life into the world, and the hope for a new life.  Whereas the ochre [colour] scheme, also prevalent in the film, represents loss and trauma,” the director explains. The colour choices for Iya and Masha are linked to motherhood. Masha’s red wardrobe symbolizes her inability to bring new life, while Iya’s green attire makes it clear that she can bear children. Slowly, though, they both begin to drift towards the other’s colour, as their life and relationship with each other changes.

It’s impossible not to be blown away by such powerhouse performances. It’s both Miroshnichenko and Perelygina’s first role and you would never know it. They manage to carry the weight of war and the trauma of those women on their shoulders with such strength. Both their bodies and minds are tested and the actresses never falter under the strain. Beanpole is a fantastic piece of visual storytelling no matter how difficult it is to watch. The film’s slow pace doesn’t do the latter any favours, but it’s nonetheless moving. Despite the film’s time period, its Russian director, Russian setting and a cast of mostly Russian actors, it’s a story that carries with it a timelessness and sense of familiarity as you realize that PTSD is something contemporary and is a mental illness that continues to affect, not only men but women, too.