Before he became known to kids as the voice of a cute, animated donkey, Eddie Murphy’s signature role was, arguably, that of Detective Axel Foley, a motor-mouthed, street smart, wise-cracking cop who would inevitably get results while being chewed out by authority figures he never listened to. He was the epitome of the gung ho, action movie, cop of the ’80s. 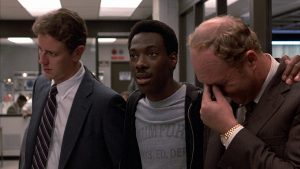 Beverly Hills Cop is the first of three movies starring Murphy in the role that helped him rule the box office for a number of years, and it remains both the best of the three, and also one of his best ever roles. When his friend, visiting from out of town, is shot dead right by his apartment, Axel Foley is determined to find out who was behind the killing and to put the scum behind bars. Unfortunately, his boss doesn’t want him anywhere near the case so Foley, instead, decides to go on holiday. To Beverly Hills. That’s where his friend had been working for a little while, and that’s where Foley thinks he can find answers. It’s not long until he’s upsetting the local law enforcement (Judge Reinhold and John Ashton as, respectively, Rosewood and Taggart, and Ronny Cox as their boss) and one or two men that he thinks may know a thing or two about crime (Victor Maitland, played by Steven Berkoff, and his right hand man, played by Jonathan Banks). 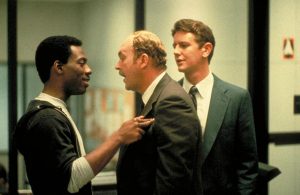 Directed by Martin Brest, and written by Daniel Petrie Jr, this is a lively action comedy that mixes in just the right amount of genre elements to please everyone. It’s helped immensely by being able to put Murphy front and centre at a time when he was probably the hottest young comedian around, but the reason why this holds up so well is due to all of the other ingredients. 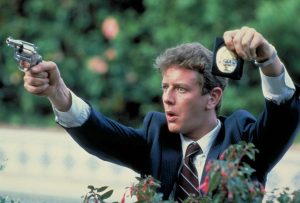 For the cast, Reinhold and Ashton are one of the best double acts not officially billed as a double act. They play off each other, and Murphy, brilliantly, and start to raise the whole movie. Ronny Cox may not get to work with too much comedic material, although he’s involved in one or two hilarious scenes, but he’s very good as the man doing things by the book, but also ready to listen to his gut instincts. Gilbert R. Hill and Paul Reiser are both also very good in small, but worthwhile, roles as members of Foley’s department in his home of Detroit. Berkoff and Banks both excel as the main villains (no spoilers here, this isn’t a whodunnit, it’s a howwillhegetthem?) and Lisa Eilbacher does well enough as a young woman stuck in the middle of a horrible situation. She’s friends with Foley, and was a friend of the murder victim, but works for Berkoff’s character, and can’t believe that he would be involved in anything like that. Last, but by no means least, there’s Bronson Pinchot stealing his scenes as Serge, the man to sort you out if you’re in need of an espresso: “you like espresso? I make it back there myself with a little lemon twist, it’s good.”

As if the cast, direction and script weren’t good enough, Beverly Hills Cop also benefits from a superb soundtrack, featuring at least two pop classics (Axel F, by Harold Faltermeyer, and The Heat Is On, performed by Glenn Frey) and a number of lesser tunes I still can’t help enjoying, such as Neutron Dance, performed by The Pointer Sisters, and Don’t Get Stopped In Beverly Hills, performed by Shalamar. Some people may think it sounds a bit dated and cheesy nowadays, but I think the soundtrack to this movie holds up as one of the very best. 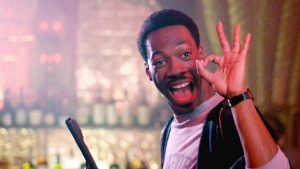 A firm favourite that most people will want to keep in their movie collection.

Uncle Boonmee Who Can Recall His Past Lives (2010)